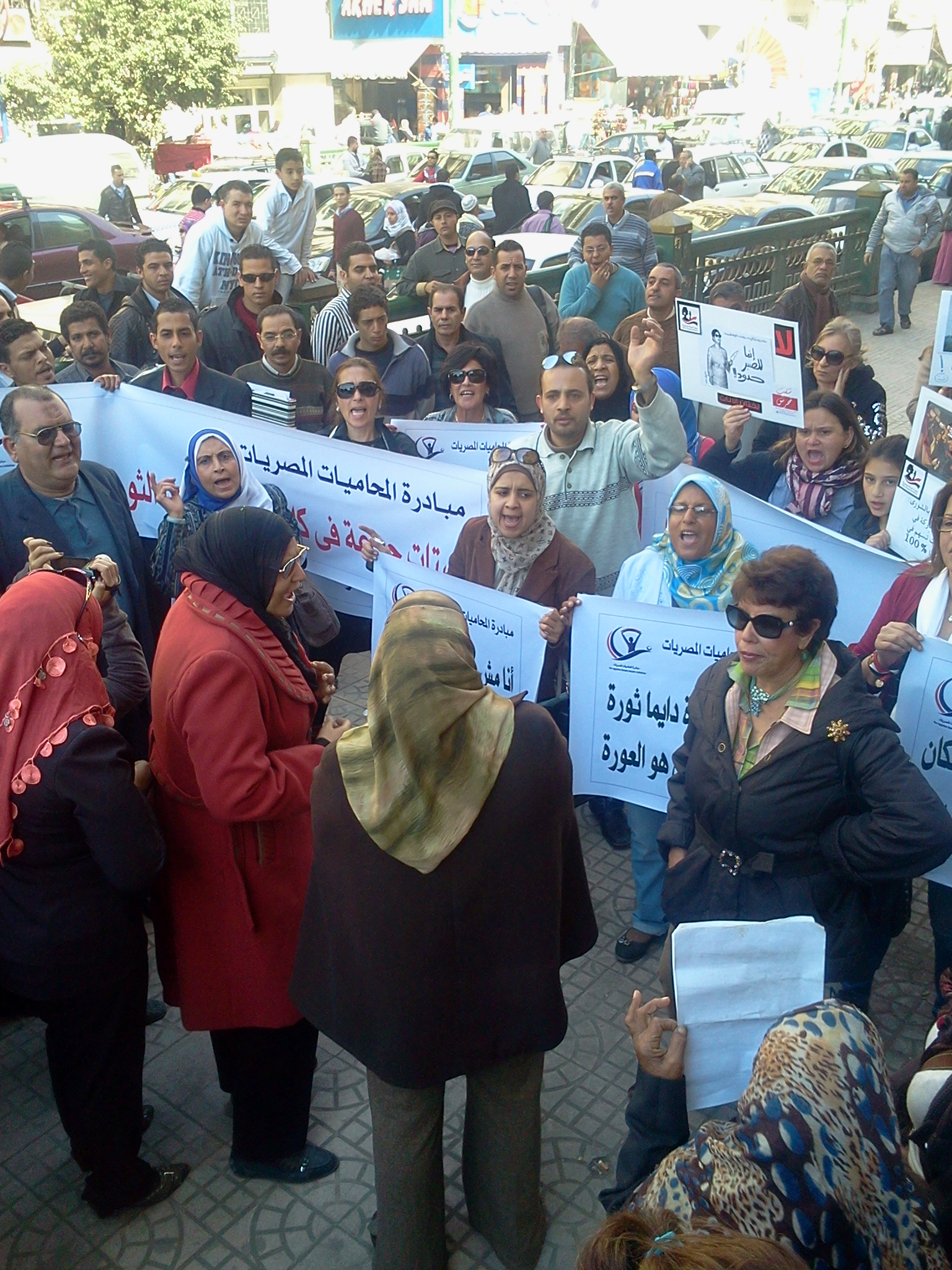 Tens of women gathered on Wednesday in front of the Prosecutor General’s office, in the High Court complex, protesting against statements insulting women made by several high profile figures recently.

Protesters demanded the departure of President Mohamed Morsi. According to Hala Kamal, one of the protesters, Morsi is dragging Egypt back into the Middle Ages.

Protesters brandished signs expressing their anger over government policies and stating their demands. They criticised the Shura Council for the recent statements it has made about women, blaming women protesters for sexual harassment and claiming that women should not participate in protests. Head of the Asala Party Adel Afifi said that women should protect themselves before asking security forces to do so.

Abu Islam, an extremist Islamist preacher, also blamed women for sexual harassment. In a Youtube video published on 1 February, Abu Islam commented on the sexual harassment incidents, describing women who were harassed as “fighters for the devil”.

Protesters also chanted slogans against Prime Minister Hesham Qandil in reaction to his statements about women. Qandil claimed that babies fall ill with diarrhoea because mothers do not wash their breasts properly before breastfeeding their infants.

“They said women’s voices are shameful, but women’s voices can ignite revolution” and “Abu Islam Abu Islam, don’t ever appear on media outlets again” were among the most frequent slogans chanted by protesters.

Shahenda Maqlad, a prominent female activist and the secretary general of the Farmers Union, attended the protest. Maqlad came to prominence after a Morsi supporter was photographed forcibly shutting her mouth during protests at the Itihadiya presidential palace two months ago.

Maqlad said she is attending the protest, although she is old and unable to march or chant, because she has a message to deliver. “No one will be able to muzzle Egyptian women; we won’t be scared away,” she said.

Maqlad said that the Muslim Brotherhood won in the previous elections by deceiving Egyptians. “Their shameful policies have shown Egyptians the true face of Muslim Brotherhood. Now they have lost the support of the masses,” she added.

Maqlad said that statements issued by Qandil, Abu Islam and members of the Shura Council reveal the intentions of the ruling regime, adding that women’s activism would rebel against attempts to oppress them.

On the calls for military to intervene in political affairs, Maqlad said that Egyptians respect the military because it belongs to them and not to the ruling authority. However, she said, the army should concentrate on protecting Egyptians from Muslim Brotherhood “militias” rather than reassuming power.

The number of protesters did not exceed a few hundred and there was no exceptional police presence.