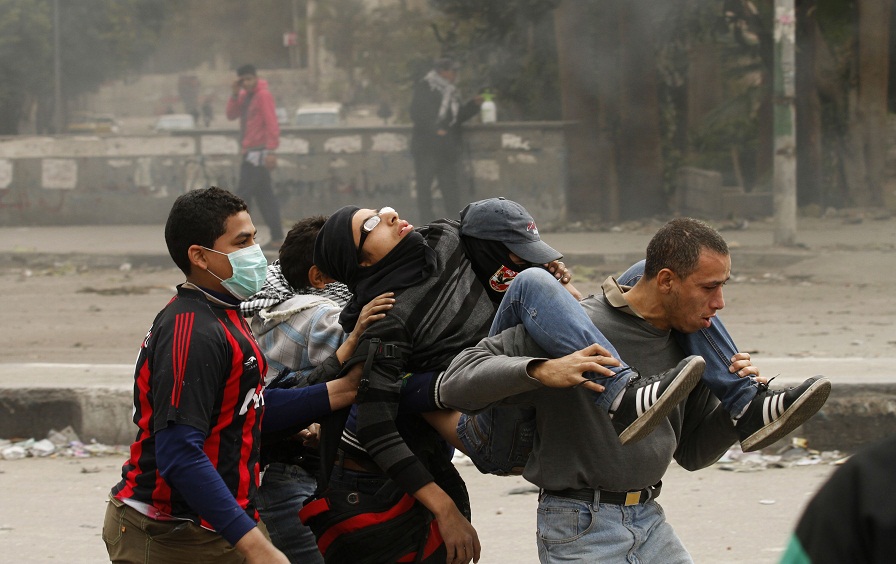 In response to claims by protesters and civil groups that the police use live ammunition, the Egyptian Initiative for Personal Rights (EIPR) published segments of resolutions which govern the arming of security forces.

The law the EIPR referred to is the ministerial decree 156 of 1964 on the regulation and use of firearms. Under this decree police officers are permitted to use live ammunition to disperse protesters. Combined with the third administrative decree of 2007, which regulates the arming of Central Security Forces (CSF) and private security, as well as the third administrative decree from 2000 which regulates the arming of public security forces, the EIPR concluded that all formations of security include a certain amount of live ammunition, and that all vehicles used by these forces contain a wealth of live ammunition.

The EIPR, the Egyptian Centre for Economic and Social Rights, the Nadim Centre for the Rehabilitation of Victims of Violence, the Association for Freedom of Thought and Expression and the Arabic Network for Human Rights Information filed a case against the implementation of these laws in February 2012. The case, according to EIPR, will be brought to the Administrative Court on 26 February.

KarimEnnarah, a researcher at the EIPR, said there is no question police officers carry guns. “There is plenty of evidence on video,” he said, adding that the ministry tries to impose an alternate reality through the media. “Any riot police unit has to have at least one AK 47 in the car,” he added. “This doesn’t necessarily mean they have instructions to use them but you can’t have riot police without AK 47s in their arsenal for their protection.”

Ennarah said the EIPR believes one of the main problems of policing in Egypt is the fact that they carry so many arms, which ultimately leads to collateral damage. “There is very little regulation and what we see as the problem, they see as the solution,” he said, adding the police see themselves as being in conflict with the population.

Recent protests organised by the police demanded the Ministry of Interior arm officers with live ammunition to counter the growing violence directed at police officers. Minister of Interior Mohamed Ibrahim agreed to supply police officers with 100,000 pistols to arm personnel facing “extremely dangerous criminals” as police said they could not defend public institutions with teargas alone.

Following the violence in Port Said after a court handed the death sentence to 21 people in connection to the Port Said football massacre last year two police officers were killed defending the prison in which many of the convicted suspects were being held. Violence broke out immediately after the verdict, at which point protesters attempted to storm the prison. More than 30 people died that day in Port Said.

If the court rules in favour of the lawsuit, the decision would repeal Law 156 of 1964 and force the government to issue new legislation a or decree which regulates the right to bear and use firearms by security personnel.