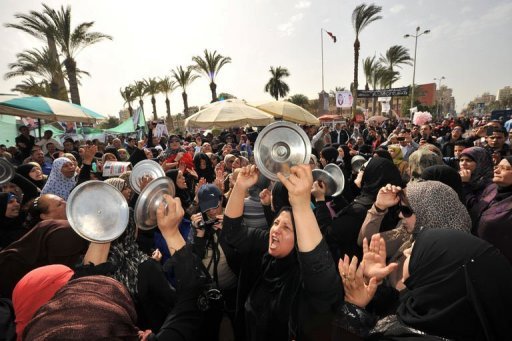 Civil disobedience resumed in Port Said as demonstrators continue to shut down the administrative buildings of the Suez Canal terminal.

The eastern port and shipyard remained nonfunctional as workers continued their strike. Boat owners organised a naval demonstration in the Suez Canal waterway.

A partial strike also took place in schools and governmental sectors on Saturday, according to accountant Mahmoud Qandil.

Protesters rejected political parties’ representation in the strike by not allowing any political banners in the squares.

In Hai Al-Arab Street, a number of protesters have established a “public police station” on Friday night under the slogan “people in the service of the people”.

In Domietta, protesters used more peaceful methods as they launched the “I am not paying” campaign in which they asked citizens not to pay any bills to the government, including electricity and taxes as means of civil disobedience, Rehab El-Naasan, 6 April Youth Movement member, said. Calls to boycott paying bills to the government have spread to Port Said as well.

Prime Minister Qandil announced on Saturday that the government will provide people of Port Said with the utmost care, according to a press release by Egypt State Information Service.

He added that he is in constant contact with representatives of Port Said in the Shura Council as well as executive officials in the governorate, including the governor.

Qandil pointed out that there is a need to increase job opportunities in Port Said, Suez Canal cities and all cities in Egypt. He stated that the government is working towards beginning several projects to provide 750,000 job opportunities by the end of the current financial year.

Protesters plan to continue their civil disobedience until the verdict of the Port Said massacre trial is announced on 9 March.