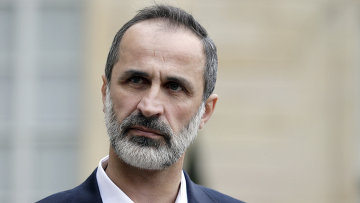 Several names have been put forward to head the government while international efforts to solve the crisis continue, including President Mohamed Morsi’s Quartet.

The Syrian National Coalition (SNC) has announced its intention to form a government which will govern the areas of Syria that have been ”liberated”.

The announcement was made following a SNC meeting in Cairo on Saturday. Sonir Ahmad, a spokesperson for the coalition, told the Daily News Egypt that “the new government will govern all of the liberated areas of Syria”. He added that “the coalition has the legitimacy to do this by law and it has been recognized by over 170 countries”.

This announcement comes as international efforts to find a peaceful solution to the crisis continue. On Friday the Minister of Foreign Affairs Mohamed Kamel Amr called on the Arab League and the Organisation of Islamic Cooperation (OIC) to support President Mohamed Morsi’s quartet initiative to solve the Syrian crisis.

Kamel Amr published a statement on Friday saying that Egypt will be increasing its efforts to solve the Syrian crisis and announced the “revival of the Egyptian initiative”.

Morsi’s quartet includes Egypt, Iran, Saudi Arabia and Turkey. The revival of the initiative will recognise the proposals recently put forward by SNC President Ahmed Moaz Al-Khatib. The proposals include his “readiness for dialogue to reach a transitional government” in order to “restore calm in the country”.

Kamel Amr said “this concept should be expanded and involve the Arab League, the OIC and the international envoy [Lakhdar Brahimi]”. He called on these parties to act as “sponsor and guarantor of the success of the initiative”.

The quartet has met three times since its creation; however, a representative from Saudi Arabia attended only the first meeting.

Kamel Amr said that Egypt is opposed to any military solution to the Syrian crisis, as it “will only result in more destruction and bloodshed”. He also asserted that Egypt “does not see a role for President [Bashar] Al-Assad in the new Syria”. He added: “There are other opinions that believe he has a role. The Egyptian position does not see this.”

Iran has continually expressed its desire to keep Al-Assad in power in Syria.

Last week the Iranian ministry of foreign affairs confirmed its support for the quartet initiative saying that the proposed plan was similar to Iran’s vision for ending the crisis.

Kamel Amr added that“Cairo is currently considering a number of ideas” to be included in the initiative, saying Egypt would continue its efforts to resolve the Syrian crisis at the upcoming Friends of Syria meeting in Rome, scheduled for next Thursday.