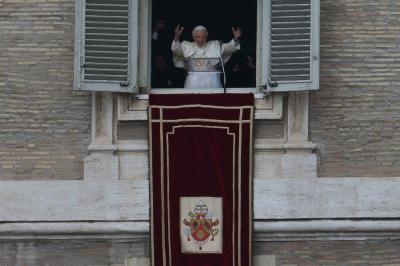 (AFP) – Pope Benedict XVI delivered an emotional last Sunday prayer in St Peter’s Square, saying God had told him to devote himself to prayer but assuring supporters he would not “abandon” the Church.

Tens of thousands of supporters turned out for the historic prayers ahead of the pope’s formal resignation on Thursday, often interrupting the pope with their clapping, cheering and chanting.

“The Lord is calling me to climb the mountain, to dedicate myself even more to prayer and meditation. But this does not mean abandoning the Church,” the popetold the crowd from the window of his residence in the Apostolic Palace in the Vatican.

“If God is asking me to do this it is precisely so I can continue to serve with the same dedication and love as before but in a way that is more appropriate for my age and for my strength.”

The 85-year-old leader of the world’s 1.2 billion Catholics has said he will step down because he no longer has the strength of mind and body to carry on.

His shock resignation ended an eight-year pontificate dominated by the priest child sex abuse scandal and efforts to counter rising secularism in the West.

He thanked the crowd with a final unscripted call, telling them: “We will always be close!”

The Vatican and Rome police estimated the numbers at more than 100,000 people — many times more than usually attend the traditional Sunday prayer.

“Holy Father, We Love You”, read one banner seen in the crowd. One read: “Thank You, Your Holiness” and another said: “Dear Father, We’ll Miss You”.

“I have come to support the pope and to ask for his blessing,” said Joao-Paulo, a 26-year-old trainee priest from Brazil who came with fellow seminarians.

Birgit Marschall, 37, a teacher from Germany, said: “He is an intellectual who speaks in simple language, who writes what we have in our hearts.”

Claire Therese Heyne, a 34-year-old theology student from the United States, said the pope “must have had a very strong reason” to leave.

“It is an act of courage and humility,” she said.

Benedict will be only the second pope to resign of his own free will in the Church’s 2,000-year history, and the first to do so since the Middle Ages.

But Gianpaolo, 33, said Benedict had been “less courageous” than his predecessors, and many people looked ahead to the pope’s successor and stressed the need for major reforms.

“The Church has to have a major reflection after this resignation. Something has changed inside the Church and this decision reflects this,” said Gianpaolo, who came with his two sons.

Forty-five-year old Linda came from Wales in Britain for the event, saying: “He was not so open as the last popes before him. A new pope should be more open to people, to new ideas.”

There was tight security in and around the Vatican, with more than 100 police officers and snipers on surrounding buildings, as well as two field clinics and hundreds of volunteers to help pilgrims.

The security is being seen as preparation for the pope’s final general audience in St Peter’s on Wednesday where around 200,000 people are expected.

Some Italian media have speculated his health may be far worse than the Vatican revealed, and others have said an explosive report into the “Vatileaks” scandal may be to blame.

The Vatican’s Secretariat of State — effectively the government of the Catholic Church — took the unusual step on Saturday of issuing a formal statement condemning “completely false news stories”.

The Panorama news weekly and the Repubblica daily said a report by a committee of cardinals into the leaks of confidential papal papers last year had uncovered allegations of intrigue, corruption and blackmail in the Vatican.

No clear favourite has emerged to succeed Joseph Ratzinger. But many observers say the cardinals, who make the choice, may plump for a much younger candidate who is a more pastoral figure than the academic Benedict.

A series of meetings of cardinals starting Friday will determine the date of the start of the conclave to elect a new pope. The Vatican has hinted that it could be brought forward to early March since there is no papal funeral.

Conclaves can last for days before a candidate wins a two-thirds majority.

The Vatican has said Benedict will retire to the papal summer residence of Castel Gandolfo near Rome for the next two or three months while a former monastery inside the Vatican is renovated.

Benedict has said he will live “hidden from the world” but Vatican spokesman Federico Lombardi has said he could provide “spiritual guidance” to his successor and will likely continue to publish his theological research.