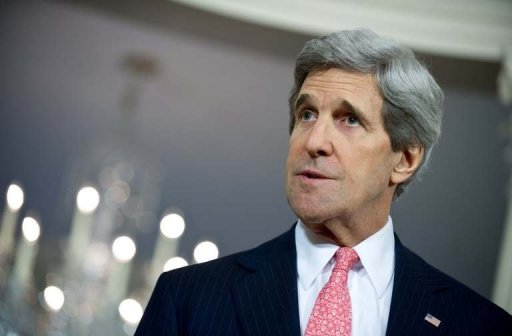 A plane carrying the new US secretary of state and his team took off from Joint Base Andrews outside Washington at around 7:15 am local time.

The first stop will be London, where Kerry will meet with senior British officials, State Department Spokeswoman Victoria Nuland told reporters on Friday.

Kerry then travels to Berlin where, in addition to meeting Germans, he will encounter his Russian counterpart, Sergei Lavrov, for a tricky exchange at a time when Moscow and Washington are at loggerheads on many issues.

“Obviously, they know each other well from when Secretary Kerry was Senator Kerry, but it will be their first opportunity to sit down bilaterally as foreign ministers,” Nuland said.

Nuland added: “I would expect they’ll talk about all of the issues, bilateral, regional, global – but with a particular emphasis, I would expect, on Syria, Iran, North Korea and the bilateral issues of the day.”

The marathon trip underscores Washington’s new foreign policy imperative, which is subtly pivoting away from Asia and increasingly towards Europe.

Tyson Barker of the Bertelsmann Foundation think tank said that, after a first term focused on relations with Pacific countries, President Barack Obama hopes “to consolidate and retro-fit some of our legacy relationships”.

Kerry is a figure of standing in Washington.

He served for decades as a US senator, including a stint as the chairman of the chamber’s Foreign Relations Committee. He was also the Democratic party’s presidential nominee in 2004.

Among the issues high on his agenda during the marathon series of talks is a newly-announced effort to agree a free trade agreement between the United States and the European Union.

Obama announced the proposed Transatlantic Trade and Investment Partnership in his annual State of the Union address last month, and said the agreement would boost economic growth and jobs on both sides of the Atlantic.

Nuland added, on a personal note, that Kerry’s visit to Berlin “will also be an opportunity to reconnect with the city in which he lived as a child”.

The 69-year-old diplomat’s father, Richard Kerry, was a Foreign Service officer who was posted in Berlin, where John Kerry lived before being sent to a Swiss boarding school at the age of 11.

Kerry travels from Germany to Paris, where Nuland said he would meet senior French officials to discuss American assistance for France’s ongoing military operation against Islamist rebels in Mali.

On his next stop, in Rome, Kerry will concentrate on multilateral talks on the crisis in Syria.

However, Syria’s main opposition umbrella group, the National Coalition, has canceled plans to attend international meetings on Syria in Italy, saying it wanted action not words from Arab and Western countries.

Instead, the coalition announced on Friday it would set up a government to run areas of the country “liberated” by rebels and would meet in Istanbul on March 2 to name a prime minister.

Kerry will travel to Ankara for meetings with Turkish officials on a range of strategic issues, including Syria.

His travels conclude in the Middle East.

In Egypt, Kerry will meet with political and business leaders and the secretary general of the Arab League, Nabil al-Arabi.

He will then go to Riyadh for meeting with Saudi leaders on “a broad range of shared concerns,” said Nuland.

Kerry then visits Abu Dhabi, capital of the United Arab Emirates, and Doha, Qatar, key contacts for America as it confronts crises in Syria, Afghanistan, and the Middle East peace process.