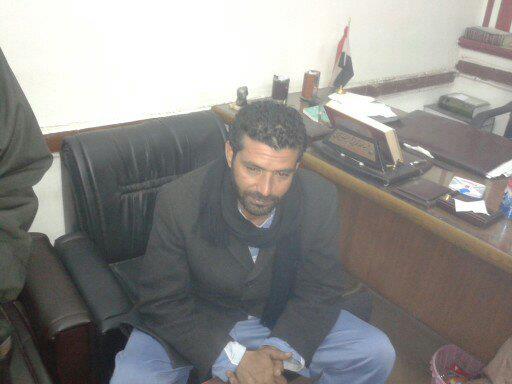 On 14 February clashes broke out between police and lawyers outside the Boulak Abul Ella Police Station. The fight erupted when lawyer Mohamed Reda was barred from entering the station to visit a detainee. Hamada Al-Masry was called on to the scene along with paramedic Ahmed Abu Gabal to treat the wounded and document the events, only to be arrested moments later.

Al-Masry is a political activist, who has been very vocal since the onset of the 2011 Revolution. His wife, Noha Magdy, said he was often present at protests and fought for a better Egypt.

Coming from a well-known family in Minya, Al-Masry has two daughters and was an avid supporter of President Mohamed Morsi leading up to the elections. His support of Morsi was such that it complicated his marital relationship, Magdy said, adding that he had exerted a lot of pressure on his wife to vote for the Muslim Brotherhood’s backup candidate. “Now look at what the government is doing to him,” Magdy exclaimed.

Prior to Morsi’s ascent to power, Al-Masry had been approached twice by members of the armed forces, Magdy said. Twice he was offered land, money and cars to leave the Tahrir Square, but twice his wife said he refused. These meetings, she added, were led by the former Chief of Staff Sami Hafez Anan and Field Marshal Mohamed Tantawi.

Although he had supported Morsi prior to the presidential elections, Al-Masry still protested in the streets to defend the revolution, even if that meant going against his chosen candidate.

“I tried to convince him before to carry a weapon, because he would always come home late from the streets and it was dangerous,” Magdy said. “But he always refused to do it, saying his protection would be left at the hands of God.”

Magdy spoke of her husband with sadness creeping in at the edges. “He has never laid a hand on any of his daughters; he is a kind and gentle man that has always treated his family fairly and decently.”

Nearly two weeks after being detained by security forces at the Boulak Aboul Ella Police Station for allegedly attempting to break in, Al-Masry will appeal his arrest on Monday.

He had been arrested outside the police station by what who his lawyer Omar Mekkary described as “thugs”. He was stabbed in the back and taken within the station, where he was charged with attempting to break into the police station and possession of a firearm.

Mekkary said the police did not initially provide medical assistance to Al-Masry, but after pressure from lawyers and civil groups, a doctor was finally allowed to treat him.

Mekkary said he has been in communication with Al-Masry, and has been a part of the on-going investigations. Nevertheless, Mekkary added, his detention is unlawful.

Mekkary said a separate case against Al-Masry was filed after his arrest by prosecutors, whom claim they have linked a weapon found in a car in the Darb El-Ahmar neighbourhood to the defendant.

An appeal session is set to take place this Monday. Mekkary said he believes it will likely rule in Al-Masry’s favour as his defence is very strong.

Magdy did not share Mekkary’s optimism, saying the country is in the grip of a system that revels in injustice. “Due to the unfair and unjust circumstances our country is going through,” she said, “he will never go free.”