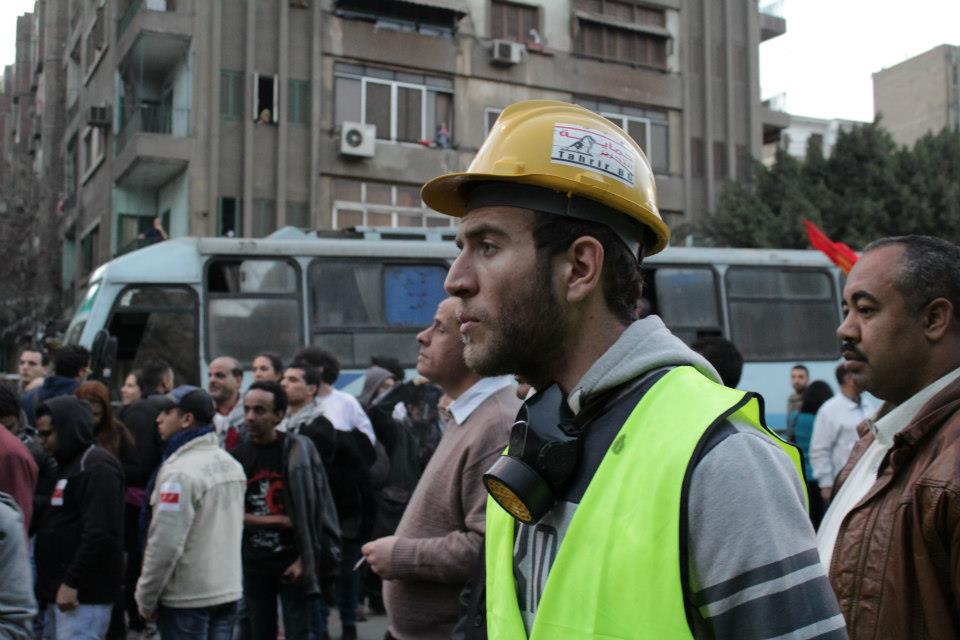 When one hears of sexual harassment, one immediately thinks of Egypt. It does not matter that sexual harassment is a global phenomenon; it has become one of the landmarks of this country. More recently, this despicable act has been used politically to target women protesters in Tahrir Square.

However, a group of young people are trying to change this reality by becoming women’s bodyguards during protests. The initiative is called Tahrir Bodyguard, and it relies on people who volunteer their own time and efforts to make sure women are not targeted.

Their shiny yellow vests make it easy to spot them in case of trouble. We contacted Mahmoud Othman, the group’s PR handler and a former Lead Field Manager.

The initiative started with a woman pleading for help. “It started in late November [2012] when a woman wanted to go to Tahrir to participate in the protests, but feared for her safety when she read about the sexual assaults taking place. Unwilling to see more of these assaults taking place, she started a Twitter account asking for volunteers to join and help make Tahrir a safer place for women,” Othman recalls.

But who are the people behind Tahrir Bodyguard? “We are a non-partisan, self-funded group of committed citizens who are not satisfied with the status quo, and are ready to walk as far as necessary to change it. Most of us are full-time employees at multinationals, companies, and NPOs, who are donating their own time and resources out of civic duty. We believe the path to a better Egypt is paved with individual social responsibility,” explains Othman.

Recently, Tahrir Bodyguard organised a self-defence class for women, hoping that it would help women to feel more in control. “This is a basic self-defence crash course, which provides trainees with basic information about fatal body points that do not require much strength to make an impact, and prepares them mentally to deal with assaults,” says Othman.

Even the self-defence course relies on volunteers: “We are finding great co-operation from venues and trainers; Samia Allouba’s fitness centres have agreed to donate a weekly slot in their schedule for this course in all their premises. We know it’s not guaranteed that this course will prevent rape, but it will empower more women to be confident in the face of those attacks, and hopefully, decrease the potential for successful assaults.”

Volunteers are not picked at random, but are screened first to make sure they are not part of the problem. “We look for committed people, who understand the importance of their role. We scan national ID cards to make sure of their ‘security classification’ i.e. citizens who have no criminal record. A martial arts background is preferred,” says Othman.

For a group based on volunteers and personal effort, Tahrir Bodyguard appears very organised. They also recruit women volunteers for specific tasks: “Yes, we have female volunteers, who co-ordinate many aspects of our work. They are escorted by the male volunteers in a 1:5-10 ratio. In the field, they don’t intervene in clearing a path around the victim or survivor, but they do help with calming down the victim or survivor once we get to her. We take all necessary measures to ensure their safety,” explains Othman.

Currently, their main focus is getting women out of dangerous situations. “Our main goal at the beginning was rescuing the victim or survivor. Our resources are limited, and in cases of mob harassment it’s almost impossible to be able to ‘arrest’ anyone. As we grow in numbers, we will have secondary teams on the ground whose responsibility will be the actual harassers,” says Othman.

However, the group has great plans for the future. “We are working to register as an NGO in order to be able to start the real work of awareness campaigns, especially for the younger crowd. We believe this should be handled at a root-cause level, which starts with education. Therefore, we intend to reach out to schools and universities to help form proper understanding of this social disease at an early age.”

The group has also been actively ensuring women’s safety in other protests. “We also started cooperating with political parties to ensure they provide volunteers in the event of any protest or demonstration to work with us, whose sole responsibility would be combating sexual harassment during protests. We are looking to expand this cooperation to lobby for an efficient law against sexual harassment once a parliament is formed,” says Othman.

The initiative has proved very popular: “It was surprising; it went viral in no time, and we started getting many replies about how to join or support the initiative. On the ground, whenever we are asked who we are and what we represent, and we answer, the response mostly is prayers for our safety and well-being, and words of gratitude and appreciation accompanied by some enquiries about how to join.”

In the end, Othman stresses the importance of confidence to fend off any possible attacks: “Confidence is key in the face of sexual harassment and assaults; observations show that women with unconfident body language are more likely to be attacked.”