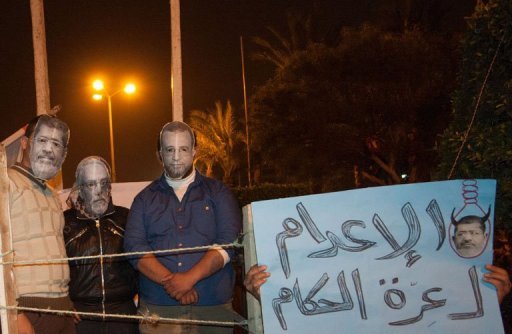 Calls for civil disobedience continue to circulate for the second week in Egyptian governorates. The campaign began in Port Said, which entered its ninth day of disobedience on Monday.

The Investment Authority, the Suez Canal Authority, and other government facilities remain closed.

“The East Port was open on Monday morning, we are unsure if this was a mistake or done on purpose,” said Mahmoud Qandil, a Port Said protester.

He said that a group of protesters were supposed to block the road and stop workers’ buses from coming into the city, but did not.

“When the buses arrived at the East Port, there were only about 15 protesters and thus the buses were able to pass and workers resumed work at the port,” Qandil added.

Marches swept Port Said on 17 February when Ultras Green Eagles, fans of Al-Masry football club, called for civil disobedience along with other groups over the “injustices” endured by residents in the governorate.

The marches called for justice for protesters killed during clashes on 26 January. More than 30 people died in the clashes after Port Said Criminal Court sentenced 21 people to death for killing 74 football fans in February 2012; the remaining defendants will be tried on 9 March.

The military spokesperson announced on Saturday night that navigation in the Suez Canal from the Gulf of Suez to Port Said is flowing normally and that there are no disruptions.

Supporters of President Morsi , allegedly members of the Brotherhood, tried to protect the building; clashes broke out between the two parties who threw rocks at one another in the absence of security forces, reported Mohamed Saied, a CBC correspondent who was inside the building.

Several were injured in the clashes, including some women.

In Giza, protesters gathered on Sunday night in front of the governorate building blocking Al-Haram Street and calling for civil disobedience.

Giza Governor Aly Abdel Rahman stated on Monday that the governorate building was open as normal.

“Despite the citizens’ rights to express themselves peacefully, it’s absolutely rejected to impede the interests of citizens or block traffic,” he said, according to state-owned news agency MENA.

In Ismailia, revolutionary groups held a meeting on Monday to plan civil disobedience in the governorate.

“The disobedience is scheduled for 3 March; we are coordinating with syndicates and workers and spreading awareness in government facilities about the importance and the goals of disobedience,” said Ahmed Owry, a political activist in Ismailia.

The official spokesperson of the Cabinet stated on the Cabinet’s official Facebook page that what was being reported in the media about civil disobedience was not true.

“What’s really happening is that some individuals are trying to force the staff of some government departments and building in governorates, such as Daqahleya Governorate, to leave their offices; if they do not respond, employees are attacked,” the statement said.

It added that the government appreciated the citizens who refused to respond to such calls, and called on workers to cooperate with the police for the sake of public interest.