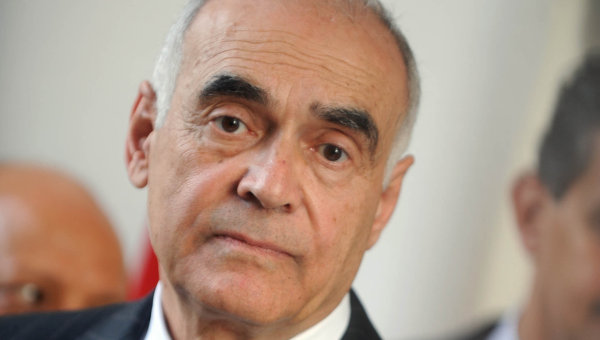 Minister of Foreign Affairs Mohamed Kamel Amr met with the president of the Syrian National Coalition (SNC), Ahmed Moaz Al-Khatib on Monday to discuss the escalating threat posed to the region and the people of Syria by the Syrian regime’s use of ballistic missiles. In a separate statement the minister also condemned Israel’s treatment of Palestinian prisoners.

According to the ministry, Kamel Amr strongly condemned the escalation of force, adding ballistic missiles have resulted in the death and injury of dozens of civilians in Syria.

The foreign minister also said that Egypt supports the coalition “in its contacts at regional and international levels aimed at ending the current humanitarian tragedy in Syria”.

Kamel Amr stressed to Al-Khatib the importance of SNC’s participation in the Rome meeting, saying that the meeting could be used to push for change in the international community.

Egypt has been vocal in its support of the Syrian opposition, but has nevertheless allowed Iran to use the Suez Canal to funnel Syrian oil out of the country on behalf of the Basher Al-Assad regime.

The SNC refused to participate in Thursday’s talks in Rome to protest the international community’s silence on the escalation of violence, and announced it would be attempting to form a new government over the coming period to govern much of the rebel-occupied north.

A separate statement published by the ministry also condemned the treatment of Palestinian prisoners at the hands of the Israeli security forces. The statement is in reaction to the death of Arafat Jaradat, a Palestinian who recently died under Israeli custody.

Jaradat was reportedly tortured to death by the Shin Bet, Israel’s notorious intelligence agency, although media reports suggest the autopsy was inconclusive.

According to AFP, Jaradat was a member of Al-Aqsa Martyrs Brigades, who have vowed to avenge his death. “This horrific crime will not go unpunished and we promise the Zionist occupation that we will respond to this crime,” the brigade said in a statement.

Kamel Amr warned that the continuation of Israeli policies will lead to an explosion of the situation in Palestine, implicating the region as a whole.

He said he holds Israel responsible for any deterioration in the region as a result of Jaradat’s death, calling on the international community to take a strong stance against “Israel’s inhuman practices against Palestinian prisoners”.