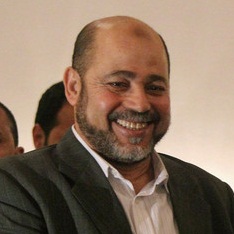 The “Our Sinai” movement responded to statements made by Musa Abu Marzuq, president of Hamas’ Political Office, labelling Sinai tribesmen as criminals and law breakers, claiming these statements are lies and based on false accusations.

During a speech entitled “Sons of Sinai’s Tribal Youth” Saeed Iatiq, the organisation’s political activities coordinator, said: “Abu Marzuq’s claims are unfounded and insulting to the people of Sinai. These statements were made with the support of leaders from within the guidance office of the Muslim Brotherhood, who seeks to extend its control over Sinai through Hamas, its agent in the Gaza Strip.”

He added saying that “this type of offensive language and illusionary imagery alluded to by Abu Murzaq would not be possible if the Muslim Brotherhood was not currently in power in Egypt.”

“Although the Muslim Brotherhood previously opposed the construction of the steel wall separating the Gaza Strip from the Sinai, they have continued to build it to the same extent as the previous regime.”

Iatiq followed continued: “The leaders of Hamas are looking to plant lies in the minds of Sinai’s youth, claiming that the historical borders of Palestine begin at the Al-Arish Valley, a claim that was reinforced by Muslim Brotherhood representative Al-Sayyid Abd Al-Fatah Dakhan during a trip to Gaza in 2008.”

He went on to say that “if the sons of Sinai are violators of the law, it is only out of support for the Palestinian resistance, for which we have sacrificed and struggled to protect”.

He further added that “over 60 Sinai youth are currently rotting away in Israeli prisons due to their support for the Palestinian resistance”.

“Let it also not be forgotten that it was the people of Sinai who harboured and protected a number of Hamas leaders fleeing Israel’s invasion of the strip in 2008,” Iatiq asserted.

He finished by saying that many Sinai tribesmen had spent over 30 years in Israeli prisons, as a result of Mubarak regime propaganda accusing them of being weapon and drug smugglers, motivated by fear of the effect on public opinion that knowledge of their actions would have.

“History shows that the people of Sinai are always accused of violating the law whenever they choose to support the Palestinian resistance, which they have done since 1948, providing weapons and other necessary supplies to Gaza’s freedom fighters.”