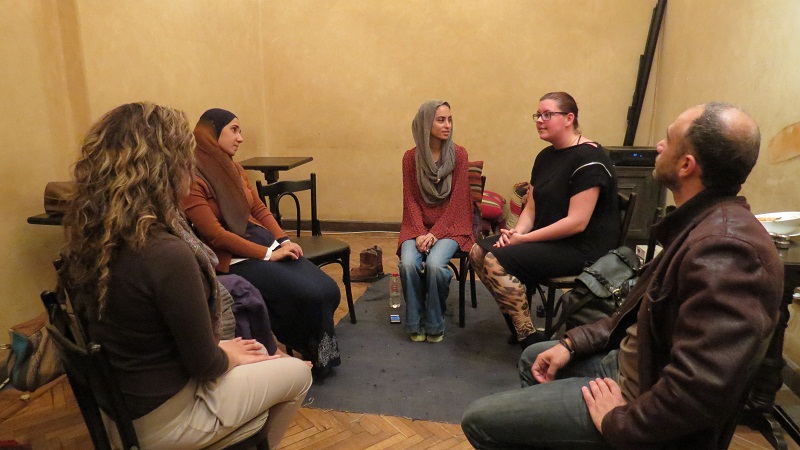 Egypt has suffered many let-downs in the past two years. The amount of daily stress the average citizen suffers has risen dramatically. Between political uncertainty and the lack of security, people find themselves turning into paranoid zombies.

Instructions on how to walk in the street have become so complicated: wear a small bag, don’t fiddle with your phone, walk confidently, beware of passing motorcycles and always carry pepper spray with you. The idea of a relaxing stroll has gone out of the window.

In these stress-elevating circumstances, one has to find a “release”, as Sonia Hassan describes it. Sonia conducts Sufi meditations to help heal the soul. She also believes that taking care of the soul results in a more relaxed and wholesome body.

Sonia, an Egyptian born and raised in the United States, was present during the revolution: “Synchronicity resulted in me being here in Egypt at that time.” She witnessed the disappointments that Egyptians faced, and she realised that there is a lack of “truth” in the country. Truth is something very important to Hassan, and something that she has been searching for her whole life.

“I studied a lot of different cultures and spiritualities. They were all very interesting, but I always felt that something was missing. I have been always searching for the truth,” explains Sonia. Her journey led her to the University of Spiritual Healing and Sufism in California. When Sonia joined the university, it had not yet been converted to the Sufi order.

However, shortly after she joined, the university’s president met a Sheikh from Jerusalem, who convinced him to convert the university to Sufism.

Sonia denies having anything to do with the actual healing. “The soul’s healing comes directly from the creator of the universe, The One. The One gives you exactly what you need at that moment,” she explained. When asked what people should expect from the sessions, she responded: “I don’t tell anyone what to expect. I don’t want them to have any preconceptions.”

Sonia’s disposition is very friendly, and when she speaks to you, she gives you her full attention. Her way of talking displays a great conviction in what she is doing. “We are asking the All-Wise to give what they need in this moment. We are going to connect to the creator,” she says with a smile.

Sonia starts her session with a prayer and then she goes on to leading the session. The meditation depends on repeating The One or Allah’s names several times, guided by the seven chakras of the body. “I like to call them the seven energy centres, a more general term,” explains Sonia.

Despite using Sufism in her meditation, she alienates no one. “I do my mediation sessions for non-believers, and non-Muslims,” says Sonia. She stresses the fact that anyone who is willing to join is welcome. In the class, there were people from all walks of life, who just want to zone out. The sessions depend on deep breathing and concentration, which Sonia explains as the core of the connection.

“We need to either cleanse what’s blocking us and allow the energy to flow within us, or to release what we need to release. Allow yourself to feel what you need to feel or not feel. Don’t think about clearing your mind. Allow thoughts to drift inside your mind,” she instructs before the session. Unlike yoga mediation, one does not need to think of nothing. This is part of allowing yourself to become a “vessel”.

“Many spiritualities and religions are the same,” Sonia says in a small discussion after the meditation session. People add their own ideas and it becomes an enjoyable discussion of how meditation affects them differently. Sonia shares her experiences with Egyptians who rejected the idea just because it was “Sufi”. “Some Egyptians are afraid of religion [because of the current political situation]. They don’t want to be associated with it,” she explains.

When asked how many times one should meditate, Sonia responds: “It’s called a practice, so you need to do it. Ideally you should practice every day. You need the spirit in the body to be connected all the time, and to keep the connection strong. The meditation sessions make people take time out of their day to connect to The Source. However, you should hold this connection all the time. ”

Sonia emphasises on the importance of allowing your heart to repeat the name of The One all the time. She explains that the heart has great influence on the soul and body. “The light and energy that come in can actually affect the cellular composition of the body,” she adds.

The sessions are conducted every week at Sufi Bookstore in Zamalek.