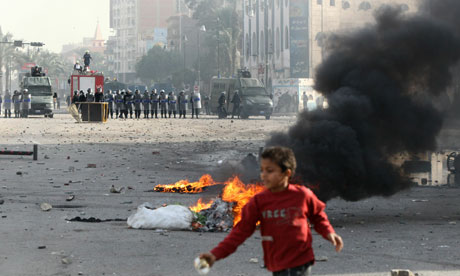 The Egyptian Organisation for Human Rights (EOHR) expressed concern for the “repeated random arrests of children and their ill-treatment at detention facilities for adults”. In a press release issued Monday EOHR singled out Amr Mohamed Abdel Hamid Hassab El-Naby, 17, as one such case.

Mohamed Abdel Hamid was arrested by security forces 22 February in Mahalla for his alleged involvement in street clashes that occurred the day, and was transferred to Qutour Central Prison.

According to EOHR, which had received complaints from Mohamed Abdel Hamid’s family, he was arrested after an altercation with a security officer. He was arrested after allegedly not carrying a motorcycle driver’s licence and was taken to the nearby police station. Upon his arrival the police accused him of attempting to break into the police station and being in possession of a weapon.

Mohamed Abdel Hamid’s family told the EOHR that he had been physically and verbally assaulted by security officers.

Hafez Abu Saeda, head of the EOHR, said that the policy of arbitrary arrests “represents a crime against humanity”. He added that it makes no sense to arrest a citizen and charge them in a case unrelated to them, except for the fact that “they are near the hotbed of events”.

Abu Saeda urged the Ministry of Interior to investigate Mohamed Abdel Hamid’s arrest, adding that the ministry should not depend on arbitrary arrests of citizens to stop them from approaching state institutions. He stressed that the rights of children must be ensured at all times and that they should not be imprisoned alongside adults.

On Sunday the Qasr Al-Nile prosecution detained three children in relation to the burning of the Scientific Institute during clashes in downtown Cairo last year. The children were sentenced to seven days of incarceration and are facing charges related to the incident, the Haqanya Centre of Freedoms reported.

Haqanya is a group of lawyers, activists and volunteers that focus on defending victims of human rights violations.

“Our analysis of the situation is that when there is an event the police want to target, they go out and arrest a large number of people,” Shahbender said. “They target the smaller, weaker, slower and younger people; those who do not threaten them and do not resist arrest,” she said, adding that this accounts for the disproportionate number of young detainees.

Shahbender added that she believes such incidents are on the rise because police “are losing it and becoming less and less efficient and more and more vindictive”. The police, she said, “are collapsing”.

EOHR is working on compiling an in-depth report on the matter, which they plan to present to the United Nations when completed.

UNICEF’s Egypt representative, Philippe Duamelle also expressed concern last week for the wellbeing of children, saying: “Children should not be victims or witnesses of violence, and their rights should be respected under any circumstances.”

Duamelle added that when children are arrested “they must be protected according to the National Child Law”, and should be neither “mistreated nor detained with adults and their rights to legal assistance must be fully secured”.