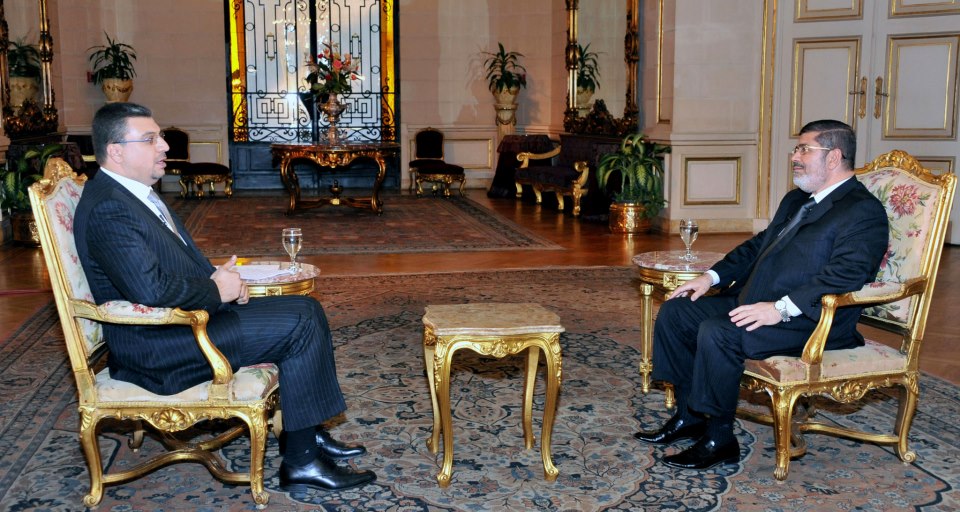 President Mohamed Morsi invited political parties and figures for a dialogue session on Tuesday to discuss the guarantees of integrity and transparency in the upcoming Parliamentary elections.

The call for dialogue was announced by Morsi during a two-hour interview with his ex-presidential adviser Amr Al-Leithy, which was aired in the early hours of Monday morning.

The session is scheduled to take place in Itihadiya presidential palace at 5:30pm and will be aired live on Egyptian TV.

According to a presidential statement, Morsi will consider all suggestions from political groups to ensure transparent elections. The meeting will also discuss methods to be used by local and international civil organisations in monitoring the elections.

The invitation was sent to Islamist political parties including Al-Asala, Construction and Reform, Freedom and Justice, Al-Nour, and Al-Watan. The call was also directed to secular parties including the Popular Current, Al-Dostour, Strong Egypt, and Ghad Al-Thawra, alongside political groups such as Kefaya and 6 April Youth Movement. The representatives of the Coptic and Catholic churches in Egypt and a delegate from Al-Azhar were also invited.

Several political figures declined to attend. The church representatives turned down the invitation, saying the meeting is “too political for the church” to get involved in, according to state-affiliated Al-Ahram.

Many public figures also declined to attend the session. Gamal Eid, a lawyer and human rights expert who refused Morsi’s invitation, described the presidency’s initiative as “a mere meeting” rather than a dialogue.

“They have not prepared an agenda for this so-called dialogue, thus it is just a meeting to hear what we have to say about the elections, although all decisions have been determined already,” Eid said.

He explained that many secular figures have sent on previous occasions initiatives relating to media and security to the presidency for conisderation, but that such initiatives were disregarded. “We tried to send our suggestions before and they got ignored. However, we are still ready to resend them,” he said.

The presidency hosted eight sessions of national dialogue to debate various issues, including the controversial articles in the constitution and Morsi’s 22 November constitutional declaration.

In his televised interview with Al-Leithy, Morsi described all these sessions as “successful” and said that he responded with actions such as cancelling the declaration, appointing 90 Shura Council members, and bringing together political groups to discuss the controversial articles.

“I love dialogue. I want dialogue and I do everything agreed upon during the meetings,” Morsi told Al-Leithy.