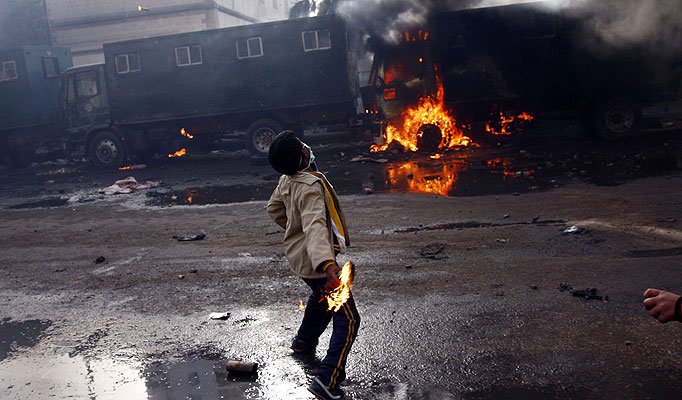 At least 13 children were among the 56 arrested when security forces raided Tahrir Square early on Tuesday morning.

The Egyptian Coalition on Children’s Rights (ECCR) released a report on Wednesday titled “Our Children are Objects of Political Exploitation” condemning arbitrary arrests of minors.

The report stated that the ages of the detained children ranged between 12 and 18 and they faced charges of disrupting traffic, throwing Molotov cocktails and preventing employees from performing their duties by closing down the Mogamma.

Lawyers from the legal unit of ECCR attended the investigations and noted cases of assaulting the children during detention.

The report also referenced random arrests, stating that some children were arrested in Talaat Harb Street and Abdel Moneim Riad Street away from Tahrir Square. It said the charges contradicted the reality of the situation as they are charged with throwing Molotov cocktails at security forces while no clashes occurred during the raid.

Colonel Khaled Abdel Aziz, warden of the juvenile care facility at the security directorate, said in these cases, children are either handed to their parents or admitted into a juvenile detention facility depending on the crime committed.

He added that his directorate is responsible for children facing dangers on the streets.

“Children should not be detained with adults; it is against Law 126 of 2008,” said Samar Youssef, ECCR’s director.

She added that “children on the streets” which is the UN term for street children, are treated by the security forces and the society as criminals when they are actually victims.

“Arrested children are usually handed to their parents, which is a sort of punishment… It is their parents who abandoned them or drove them to the streets in the first place,” Youssef said.

The Egyptian Organisation for Human Rights (EOHR) had expressed concern on Monday for the repeated random arrests of children and their ill-treatment at adult detention facilities.

UNICEF’s Egypt representative, Philippe Duamelle had stated that when children are arrested “they must be protected according to the National Child Law”, and should be neither “mistreated nor detained with adults and their rights to legal assistance must be fully secured”.