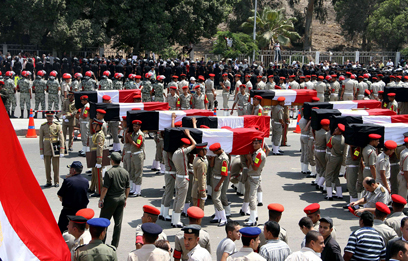 The Muslim Brotherhood’s Freedom and Justice Party (FJP) said it was investigating one of its members for a comment he made accusing the Egyptian army of playing a role in last August’s attack at the Rafah border crossing.

The FJP said it stood against prejudice against military leaders and any attempts to wrongfully expose them.

“Rumors and news spread recently aimed at shaking the people’s confidence entrenched in the Armed Forces and create discord between the political parties and between the leaders of the great army of Egypt,” read the FJP’s statement. “Thus the [FJP] wishes to emphasise its own fixed position respecting the Egyptian armed forces and its appreciation of its glorious history and its honourable present.”

The Muslim Brotherhood’s political wing praised the role of the army in the 25 January Revolution and in handing leadership over to President Mohamed Morsi as a “contribution to the protection of the people’s will and in the management of the electoral process.”

“The Egyptian army does not interfere in the political process and respects the will of the people,” read the statement.

The FJP promised to hand down disciplinary action if Abdel Fattah was found guilty of “abusing the Egyptian army”.

The party also called on political leaders not to use the army as a tool and respect its independence from the political arena.