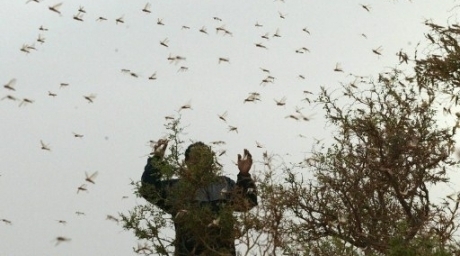 Locusts have now been spotted in Marsa Alam in the Red Sea Governorate. Locust control teams were sent to the area after they were seen 57km north of the city.

A report, which was presented by Agriculture Minister Salah Mohamed Abdel Momen to the Egyptian Cabinet yesterday, stated that monitoring committees are conducting ground control operations to combat locusts on the Red Sea Coast from spreading further into more areas.

Around 3.6 million hectares of Egypt’s agricultural lands are at stake as the locusts pose threat to winter crops.

The FAO reported that the Egyptian Ministry of Agriculture conducted operations to clear out land threatened by locusts, removing 11,000 hectares of land.

“If additional rains fall and conditions remain favourable, a second generation of breeding could occur,” said the FAO in an online statement.

The FOA also reported that 1 tonne of locusts are capable of consuming “the same amount of food in one day as about 10 elephants or 25 camels or 2,500 people”.

Salah Moawwad, head of pest control in one of the areas affected, gave a statement to the media saying “locusts can fly great distances, which makes it difficult to exterminate the destructive pests once and for all”.

Agriculture authorities and Defence Ministry officials are cooperating to prevent any swarms from spreading into farmlands in the Nile Delta. Teams have been deployed in affected areas to spray insecticide on damaged lands.

Despite the government’s intensive operations to stop locusts from targeting more areas, more swarms are forming near the Egypt-Sudan border.

Locusts can extend to over 60 countries “covering about 29 million square kilometers, or about a fifth of the world’s land”, according to the FAO.

Reports of locust invasions were spread last November when the Ministry of Agriculture declared a state of disaster in Aswan as locusts were sighted in Lake Nasser, the Eastern Desert, Hurghada, Shalateen, Sheikh Al-Shazly and others.

A similar situation took place in 2004 when Egyptian farmers in 15 governorates suffered from crop damage due to a locust plague.