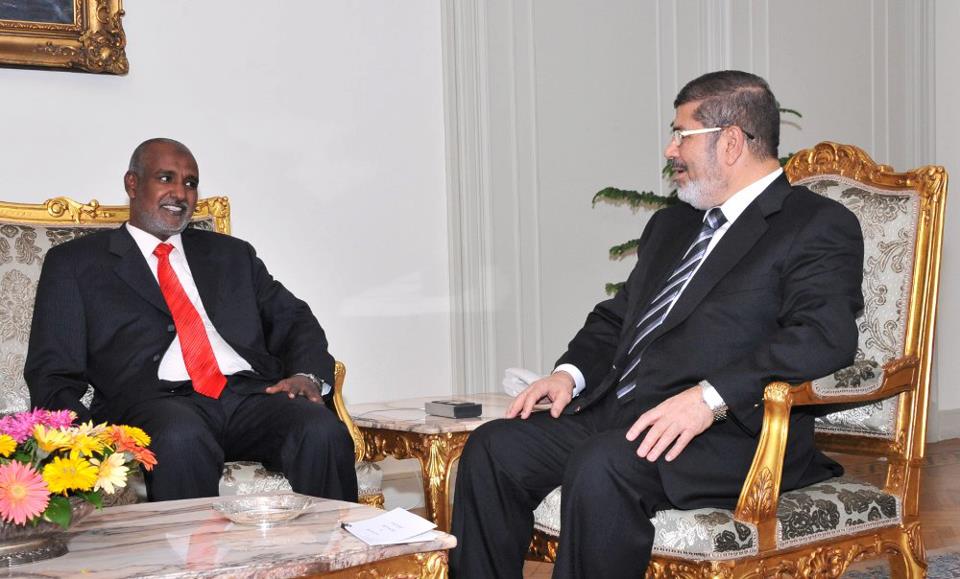 According to a statement from the Egyptian presidency the Minister of Water resources and Irrigation Mohamed Baha’a El-Din was also present at the meeting. The statement reported that “the two ministers briefed the president on developments of close bilateral cooperation… in the field of water resources and irrigation”.

The statement said that during the meeting, Morsi “stressed the importance Egypt attaches to cooperation with Sudan in all fields”, placing particular emphasis on the Nile water issue.

They discussed the coordination of Egypt and Sudan to promote the “development of cooperation between Nile Basin countries”.

In 1929, Britain secured Egypt the largest share of Nile water, a vital resource for the Nile Basin countries. In 1959 Egypt and Sudan signed an agreement guaranteeing Egypt 55.5 out the estimated 84 billion cubic metres.

In January El-Din rejected a new deal for sharing Nile water saying that it was not satisfactory for countries downstream, which includes Egypt.

The Nile Basin countries have recently sought to change the allocation of water. In February Minister of Foreign Affairs Mohamed Kamel Amr met with a Burundian representative to discuss the issue. The Burundian mediator said his country is “eager to secure Egypt’s water interests”.

In September 2012 Egypt denied that it had colluded with Sudan and was planning to build an airbase in order to attack an Ethiopian dam, which would limit water to Egypt and Sudan.

Ethiopia, which supplies most of the Nile with its water, is not guaranteed any water from the colonial agreements. In an effort to deal with the unequal water distribution, the Nile Water Basin agreement was signed in 1999 by nine of the countries that share the Nile, including Egypt and Sudan. To further combat the monopoly on the water guaranteed by colonial treaties, a new agreement was drawn out in 2010, which Egypt and Sudan have not recognised.