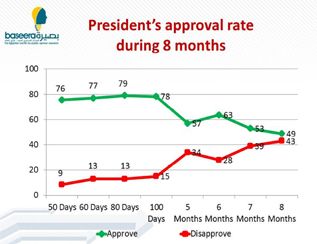 Baseera, the Egyptian Center for Public Opinion Research, conducted its periodic poll to track President Mohamed Morsi’s approval ratings after eight months in office. The results showed a continued decline in approval ratings. The percentage of those who approve of his performance fell to 49% from 53% at the end of the seventh month and 78% at the end of Morsi’s first 100 days in office.