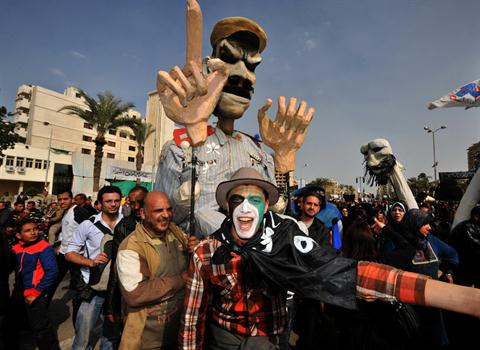 Activists reported that the notary in Port Said shut down, coinciding with the submission of a petition created by Port Said residents demanding the delegation to the army of running the country.

Resident Tarek Al-Kordy said there was trouble caused by a movement to collect signatures and that the notary temporarily shut down.

Mahmoud Qandil, another Port Said resident, said there were calls to collect signatures for the petition on Wednesday morning. By the afternoon, Qandil said the notary office seemed calm and there were no crowds or any army vehicle there.

Rumours that the army has shut down the notary office provoked an official response from Colonel Ahmed Aly, the army’s official spokesperson. He said the army’s role in Port Said is to protect institutions. “We are not a part of the political life,” he added.

He added that the army has no authority to shut down the notary, saying this “falls under the Ministry of Justice”.

“We have not asked anyone for signatures,” he concluded.

Al-Kordy said the calls for collecting the signatures were popular calls and were not made by any one political group or party.

Ibrahim Al-Sayad, another Port Said resident, said the calls on the army to intervene have recently been repeated in protesters’ chants and posters. Al-Sayad alleged that the decision to shut down the notary had come from the Ministry of Justice.

Mohamed Naguib, an activist in the port city said the demand has been widespread in the area. Al-Sayad said they are being handed out all over the city.

Earlier in February, Port Said started a civil disobedience in response to what residents feel are injustices they are experiencing. Other cities have followed suit.

Tayseer Al-Sayed, an employee at the University of Port Said, said the disobedience campaign has practically ended. She said the campaign has developed into a tendency for employees to leave their jobs early to join in with marches.

After shutting down earlier this week, the factories in the investment free zone have resumed operations again, Mohamed Eissa, a student in Port Said, said.

However, Al-Sayad did not feel that the disobedience is waning. He believed that the people developed a new way in managing the disobedience. He added that calls have spread throughout Port Said, Ismailia and Suez, known as the canal cities, to engage in full civil disobedience next Sunday.