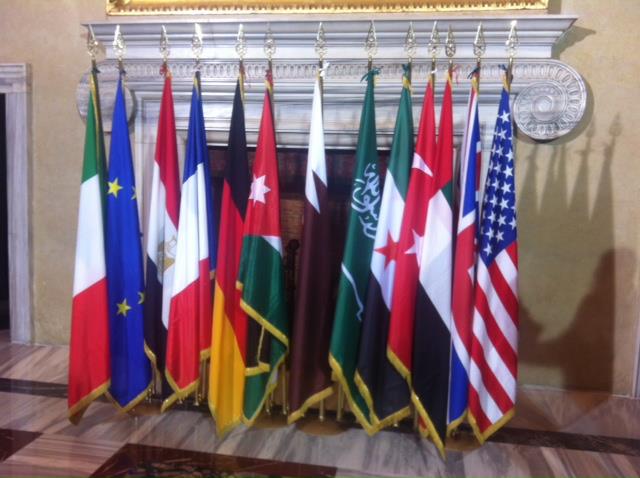 Minster of Foreign Affairs Mohamed Kamel Amr took part in the Friends of Syria meeting in Rome on Thursday. The meeting brought together ministers from a number of countries to discuss the continuing crisis in Syria.

Nazih El Naggary, deputy spokesperson for the Ministry of Foreign Affairs, published a statement on Thursday regarding Kamel Amr’s contribution to the international meeting.

El Naggary reported that Kamel Amr told the meeting’s attendees that Egypt’s position on Syria rested on “a number of pillars”. This includes Egypt’s “full support of the Syrian people and the role of the coalition to achieve their aspirations”.

Kamel Amr stressed that Egypt supports a political solution to the conflict and stressed that “the Syrian regime no longer has a place in the future of Syria”.

The minister also asserted that Egypt would use its upcoming presidency of the Arab League “to make every effort possible to support the brotherly people of Syria”.

Representatives from around the world attended the meeting, including United States Secretary of State John Kerry, who announced that US President Barack Obama has had pledged an additional $60m in “non-lethal aid” for the Syrian National Coalition (SNC)

According to a senior State Department official, the money will be used to “help local councils and communities in liberated areas of Syria expand the delivery of basic goods and essential services, and to fulfil administrative functions, including security, sanitation, and educational services”.

The official also said that the $60m aid package had two functions: firstly, “to strengthen them [the SNC] in Cairo as a political organisation that actually can begin to deliver concrete assistance to their people”; and, secondly, “to help them ensure that in newly liberated areas of Syria, the administration of those areas meets the needs of the people”.

The SNC, currently based in Cairo, recently announced its intention to form a government in order to rule the liberated areas of Syria.

Germany has pledged €5m, which will go directly to humanitarian organisations working in Syria; while Italian Foreign Minister Giulio Terzi said that Italy had “allocated €30m to help neighbouring countries to alleviate this suffering as well”.

British Foreign Secretary William Hague also announced that his country “will be adding to the assistance, to the equipment that we provide the opposition, to help the national coalition—to help them save lives”. Hague said the details of this would be announced next week.

Chairman of the SNC Ahmed Moaz Al-Khatib said that the SNC raised “several issues” at the meeting. He called for Syrian President Bashar Al-Assad to “behave for once as a human being”, and also called on the international community to “stop supplying the regime with weapons that they still receive in the context of old arms agreements”.

The SNC had considered boycotting the meeting in Rome following what it called “international silence” over a recent attack on Aleppo, which killed at least 58 people.