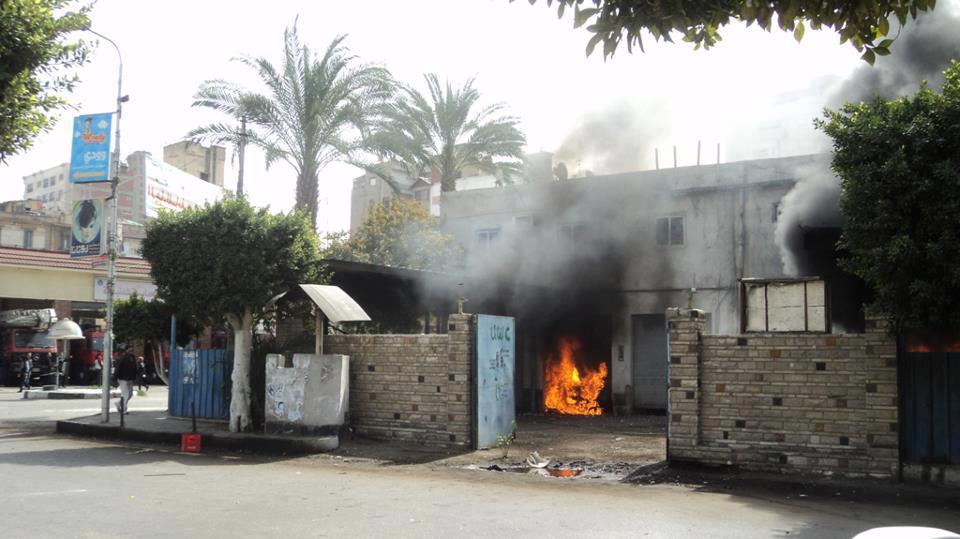 A police building in Salah Salem Street in Port Said was set on fire on Saturday morning. Residents suspect a police officer hiding in the building started the fire.

“It’s not confirmed yet whether it was the protesters or the police officer who started the fire to be able to run away,” said Mahmoud Qandil, a Port Said resident and one of the protesters.

The Ministry of Interior released a statement on Saturday saying that 500 protesters gathered in front of the police building and threw Molotov cocktails at it, causing the fire.

Tension between Port Said residents and security forces began on Saturday morning when a police car allegedly hit some protesters. Five were reportedly injured and one is in a critical condition.

“A march was going through Mohamed Ali Street chanting against the police and the interior ministry when a police car ran into them, injuring at least four,” said another protester, Tarek Al-Kotty.

The Ministry of Interior said in the statement that the protesters obstructed police cars transporting convicts to court. It added that they pelted the cars with stones, injuring four policemen and damaging two cars.

“The people chased the car after it hit the protesters, pelting it with stones; they caught two officers while the other two hid at the police building,” Qandil said.

He added that the people handed the two officers they caught to the armed forces, which were deployed in Port Said to protect vital installations. The army and the military police controlled the fire and removed the police officer from danger.

On Friday, writers from Cairo arrived in Port Said and marched with the protesters in support of the civil disobedience that started on 17 February.

“People from Alexandria and Domietta had arrived to join the marches in Port Said too,” Qandil said.

“People in Suez and Ismailia are unlikely to respond to such calls,” said Hassan Ghoneima, DNE correspondent in Suez.  He said the majority of people in these cities worked for the public sector and feared losing their jobs if they participated in civil disobedience.

Marches swept Port Said on 17 February when Ultras Green Eagles, fans of Al-Masry football club, called for civil disobedience along with other groups over the “injustices” endured by residents in the governorate.

The marches called for justice for protesters killed during clashes on 26 January. More than 30 people died in the clashes after Port Said Criminal Court sentenced 21 people to death for killing 74 football fans in February 2012; the remaining defendants will be tried on 9 March.