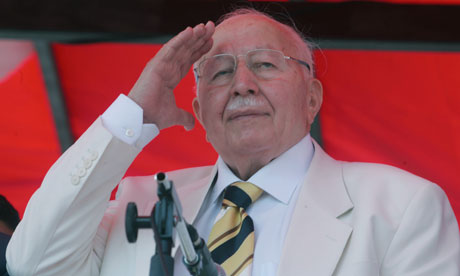 Supreme Guide of the Muslim Brotherhood Mohamed Badie flew to Turkey on Friday to take part in “Erbakan week”. The event commemorates the second anniversary of the death of Negm El-Din Erbakan, the founder of political Islam in Turkey.

A symposium was scheduled on Saturday and Sunday titled “A New World and Erbakan”; participants included representatives of Islamist movements and parties like Rashid Al-Ghannouchi, leader of Tunisian Ennahda Party, along with Muslim Brotherhood leaders in Jordan and Somalia. Islamist bodies from Pakistan, Malaysia, Yemen, Kuwait and Palestine were also represented.

Erbakan was Turkey’s prime minister in 1996 and the founder of the “National View”, an islamist political movement in the early 70s. This movement is thought to have laid the foundation for political parties based on Islamic reference.

The Turkish army asked him to step down in 1997 to protect the secularity of the state against Islamic fundamentalism and he was banned from political activity. Erbakan died in 2011.

Relations between Egypt and Turkey have improved since the 25 January Revolution, especially after the Muslim Brotherhood came into power; as both countries are ruled by Islamist parties.

Economic agreements have been discussed between the two countries in fields of industry and tourism; Turkey had offered more than $1bn to help Egypt’s faltering economy.