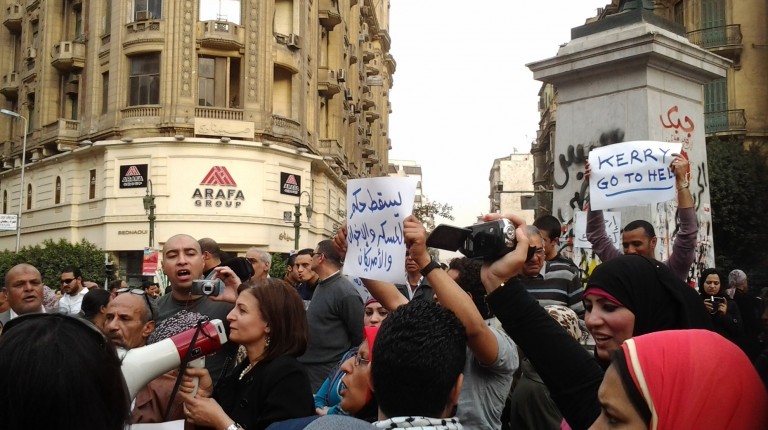 Hundreds protested in Tala’at Harb Square in Downtown Cairo on Saturday against President Morsi and the Muslim Brotherhood, in solidarity with the citizen killed by Central Security Forces (CSF) in Mansoura on Friday.

Protesters chanted against Morsi and the Muslim Brotherhood, which they described as a “Zionist group”. They held signs expressing their rejection of Morsi’s policies and calling for his departure. “Men are in Mansoura”, “Kerry, go to hell”, and “Leave, coward” were among the signs raised by protesters.

Abdel Fatah described Morsi as a “murderer”, adding that he lost legitimacy after he killed many Egyptians. On the calls for military to topple Morsi and rule the country, Abdel Fatah said Egyptians are not obliged to choose between a military dictatorship and a religious one. He further added that Egyptians would claim their freedom and live in a true democratic state.

Khaled Telema, founding member of the Popular Current, described Mansoura’s Friday clashes as “a fully fledged murder committed by Morsi and his ministry of interior”, adding that Morsi is no longer Egypt’s legitimate president.

Hossam Abdallah Abdel Azeem, a 35 year old resident of Mansoura, was on his way to visit his wife’s family when a CSF vehicle struck him during clashes between CSF and protesters on Friday night. Abdel Azeem was transferred to Mansoura International hospital, where he died a few hours later. “He was not even protesting, he left home to visit his wife’s family. President Morsi is responsible for the death of my son because he is allowing people to kill each other in the streets,” said Abdallah Abdel Azeem, Abdel Azeem’s father.

Wael Ghaly, a lawyer at the Egyptian Centre for Social and Economic Rights in Mansoura, said the prosecution’s initial incident report stating that Abdel Azeem died from a fractured skull. He added that the forensic authority did not issue a death report as the autopsy has not yet been completed.

Activist and Mansoura resident Mohamed Ezz said that Ibrahim Arafa, a doctor at Mansoura field hospital, told him that two other protesters died on Friday. The doctor said that a 16-year old protester died after a CSF vehicle struck him, while the other died of a gunshot to the head.  However, Ezz’s claims could not be confirmed.

Violent clashes broke out between CSF and protesters in Mansoura on Friday, where protesters hurled rocks at CSF, who retaliated with teargas. Abdel Meguid Rashed, coordinator of the Popular Current in Daqahleya, claimed that security forces fired birdshot at protesters, injuring several, and arrested others. He added that teargas bombs were fired at the building housing the Daqahleya offices of the Popular Current and the Social Popular Alliance Party.

Revolutionary activist Ahmed Douma posted a Facebook statement on Saturday, stating that attacking peaceful protesters is a crime for which President Mohamed Morsi should be tried.

Al-Dostour Party also condemned the CSF attacks in a statement issued on Saturday.

Additionally, the Black Bloc movement issued a statement on Saturday, announcing that they will go to Mansoura “to protect peaceful protesters and obtain revenge for the martyrs”.

Essam El-Erian, Deputy Head of the Freedom and Justice Party, commented on Friday’s clashes on his Facebook account on Saturday. “We want to save the blood of our youth for future indispensible battles: the battles of development, independence and building a strong Egypt,” said El-Erian.

The funeral of Abdel Azeem took place on Saturday. Beginning at the Al-Game’ya Al-Share’ya mosque, the funeral procession moved toward his family’s cemetery, attended by thousands of protesters calling for the resignation of President Mohamed Morsi.