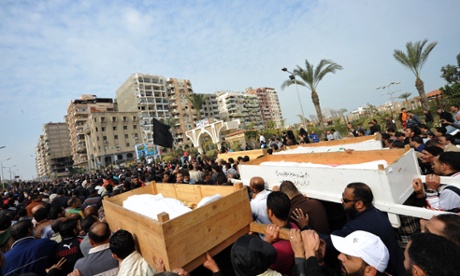 Human rights organisations said their investigations confirmed most of the dead following the Port Said football trial verdict in January were killed by gun wounds in the upper half of the body.

The rights groups released a report on Saturday with the findings as well as recommendations for Egyptian officials.

Port Said was swept by deadly violence that lasted several days, following the 26 January verdicts of 21 defendants sentenced to death for their involvement in last year’s football massacre. The sentences for the remaining 52 defendants are set to be announced on 9 March.

The violence began outside the Port Said prison where some of the defendants’ families were gathered and a group of protesters were camping out.

Evidence gathered by the rights groups suggested that seven unidentified men started shooting at police, killing two and injuring 10 officers. The rights groups believed there was not enough evidence to support the police’s claim that this was an aborted prison break.

“Police on the prison roof and grounds shot live ammunition, and by the end of the morning, the death toll stood at 28 – the two police officers and 26 people outside the prison,” the report read. Witnesses told researchers the police continued to shoot at protesters for nearly an hour after the initial assault against the police stopped.

Clashes renewed over the next two days during the funerals of those who died on the first and second day of the verdict protests. The report suggested that for the next two days, police used lethal force though any threat to their life was “unclear at best”.

Following three days of violence, the death toll rose to 42 and with over 800 injuries.

In response to the escalating violence in the Canal region, which includes Port Said, Ismailia and Suez, President Mohamed Morsi announced a month long curfew and state of emergency in the three cities.

Civil disobedience started by the residents of the port city in February pressured the Ministry of Justice to appoint a judge to investigate the violence.

The four human rights groups called on Egyptian authorities to ensure that the investigative judge conducts an independent and impartial investigation into the events. No police officers had yet been charged with connection to the events, their report said.

The groups also said reforming the Central Security Forces should be a priority to amend police law and limit use of lethal force. They also called for repealing the Ministry of Interior’s decree which allows police to use live ammunition to disperse protests and suggested replacing it with a decree that complies with international standards, which prohibit the use of firearms.

Additionally, the groups called for amending the judicial authority law to guarantee independence of the prosecutor general from the government.