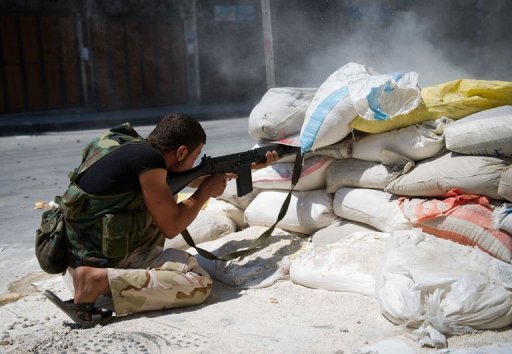 (AFP) – Hundreds of Syrian troops and rebels were killed in a week-long battle for a police academy in the northern province of Aleppo, with insurgents seizing control of most of the complex, a monitoring group said on Sunday.

“Rebels have seized most of a police academy in Khan al-Assal in Aleppo province … after eight days of fighting that left 200 troops and rebels dead,” said the Syrian Observatory for Human Rights.

The UK-based group said at least 120 army troops were among those killed in the battle for one of the regime’s last remaining bastions in the west of Aleppo province. On Sunday alone, rebels had killed more than 34 troops at the facility.

A police source in Aleppo confirmed that much of the academy had fallen into rebel hands, reporting that 40 security forces were believed dead. As many as 300 rebels were among those killed, he said.

Amateur video shot by Islamist rebels and distributed by the anti-regime Aleppo Media Centre showed a black flag flying over one of the academy buildings, while a large poster of President Bashar al-Assad had been torn.

Another video showed rebels aboard a captured military vehicle and stashes of ammunition seized from the academy.

Elsewhere, three mortars hit an area near the army general command headquarters and a customs complex in the heart of Damascus, said the Observatory.

The heavily-guarded area housing the army command headquarters was last year targeted by a car bombing claimed by the jihadist Al-Nusra Front, and two mortar rounds hit the area on February 21.

Also on Sunday, rebels in the southern province of Daraa seized an artillery battalion in Jamla village near the armistice line with Israel, according to the Observatory.