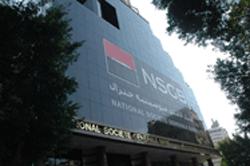 Employees at National Société Générale Bank (NSGB) are threatening to strike on Monday after the Egyptian Financial Supervisory Authority approved a mandatory tender offer made by Qatar National Bank (QNB) to buy 100% of NSGB, Société Générale’s Egypt operation, instead of the originally planned 77.17% stake.

QNB made the request to Egypt’s Central Bank and it was approved last Thursday.

QNB has offered this price compared with Sunday’s EGP 37.52.

Head of General Syndicate for Workers at Banks Gamal Abdel Nasser said that the workers will stage a protest before the lenders’ head office.

Meanwhile, EFSA told Reuters  that it had obliged Qatar National Bank to submit an offer for 100 percent of NSGB”.

Last December, QNB stated it would buy a 77% stake in the bank.

NSGB published an online statement on its website announcing: “A definitive agreement has been reached whereby Qatar National Bank will purchase Société Générale’s 77.17% stake in NSGB.”

“The problem here is in the word: Qatar,” said economy expert Sherif El-Khereiby.

“On a first impression, the situation may look negative, but the fact that money is entering the country is a good sign,” he said.

El-Khereiby said that officials in Qatar are unlikely to take advantage of the workers or “deceive NSGB in any way”.

JP Morgan Chase has been reviewing and assessing the Egyptian bank’s legal and financial fundamentals ahead of any potential agreements.

The Qatar Investment Authority (QIA), which is behind most of Qatar’s international acquisitions, owns 50% of QNB.

QNB is expected begin procedures for the takeover soon.

Qatar is also known to own stakes in Barclays, carmaker Volkswagen and luxury store Harrods.