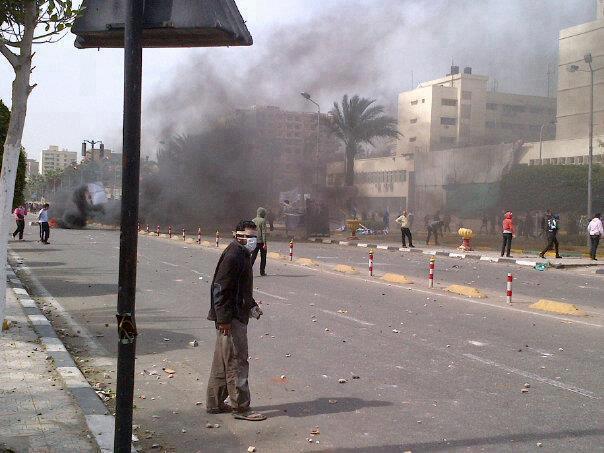 The Ministry of Interior released a statement saying that the Port Said prison was to be relocated outside the city for the safety of the people. “The ministry decided to relocate the prison; 39 defendants in the stadium case were moved and the rest will follow. A new prison will be built in a more suitable location,” the statement read.

“The defendants were deported at dawn. Their families, the Ultras and the people of Port Said surrounded the directorate and threw Molotov cocktails at it,” said Tarek Al-Kotty, a Port Said resident and one of the protesters.

Colonel Ahmed Aly, army spokesperson, said that families of the defendants tried to free them while they were being deported.

Nasser Al-Boghdady, speaking from the scene of the clashes, said the people of Port Said went to the Directorate of Security to protest the move. “The people revolted… the police fired shots in the air and fired teargas canisters,” he said. “The army then retreated to the governorate building,” he added.

Ibrahim Al-Sayad, also at the scene when the police fired tear gas, said the people are resisting police attempts to disperse the crowd.

Another protester, Mahmoud Qandil, said that the army stood as a barrier between the police and the protesters. “Army personnel called on the police to stop the assault,” he said.

Colonel Aly said the army’s duty was to protect the people and the vital installation in Port Said. He added that eight army personnel were injured.

The governorate building lies next to the Directorate of Security near Al-Masala Square, also known as the Martyrs Square, where protesters have been camping out.

Al-Boghdady said police took shelter in the governorate building and used armoured vehicles to taunt protesters and throw rocks at them. He added that plainclothes policemen were assisting the police.

Ambulance sirens could be heard in the background as Al-Boghdady spoke. He said around 30 people had fainted due to the teargas.

Al-Boghdady has been collecting signatures from the people of Port Said, calling on the army to manage the affairs of the state.

Last Wednesday, following popular calls to collect these signatures, judicial officials decided to shut down the notary where signatures are documented. However, this has not stopped the people from collecting signatures.

The closure of the notary prompted Al-Boghdady to start a notary which he refers to as the Notary of the Revolution. Signatures are documented using peoples’ national ID numbers and fingerprints.

The signatures are stamped with a stamp that says, “The Notary of the Revolution. The Free Youth of Port Said”. Al-Boghdady said he has collected 13,600 signatures so far.

The headquarters of the revolutionary notary, established on Friday, are in Al-Masala Square. People who leave Port Said also go to the square to get a stamp.  “If they are going to a governorate with a governor who belongs to the Muslim Brotherhood, we do not give them the stamp. We have severed ties with the Brotherhood… It is a kind of mockery,” Al-Boghdady added.

He added that any government agency that is shut down will be replaced in the same way as the notary.

On 26 January, 21 of 70 defendants were sentenced to death for their involvement in the death of 74 football fans during a match between Al-Ahly and Al-Masry in February 2012. The remaining defendants will be tried on 9 March.

Violence swept the city after the sentence and more than 30 people died in the clashes. Port Said has been in a state of civil disobedience since 17 February. Ultras Green Eagles, fans of Al-Masry football club, called for civil disobedience along with other groups over the “injustices” endured by residents in the governorate.

Unrest increased on Saturday when a police car hit 5 protesters and a police building was torched.