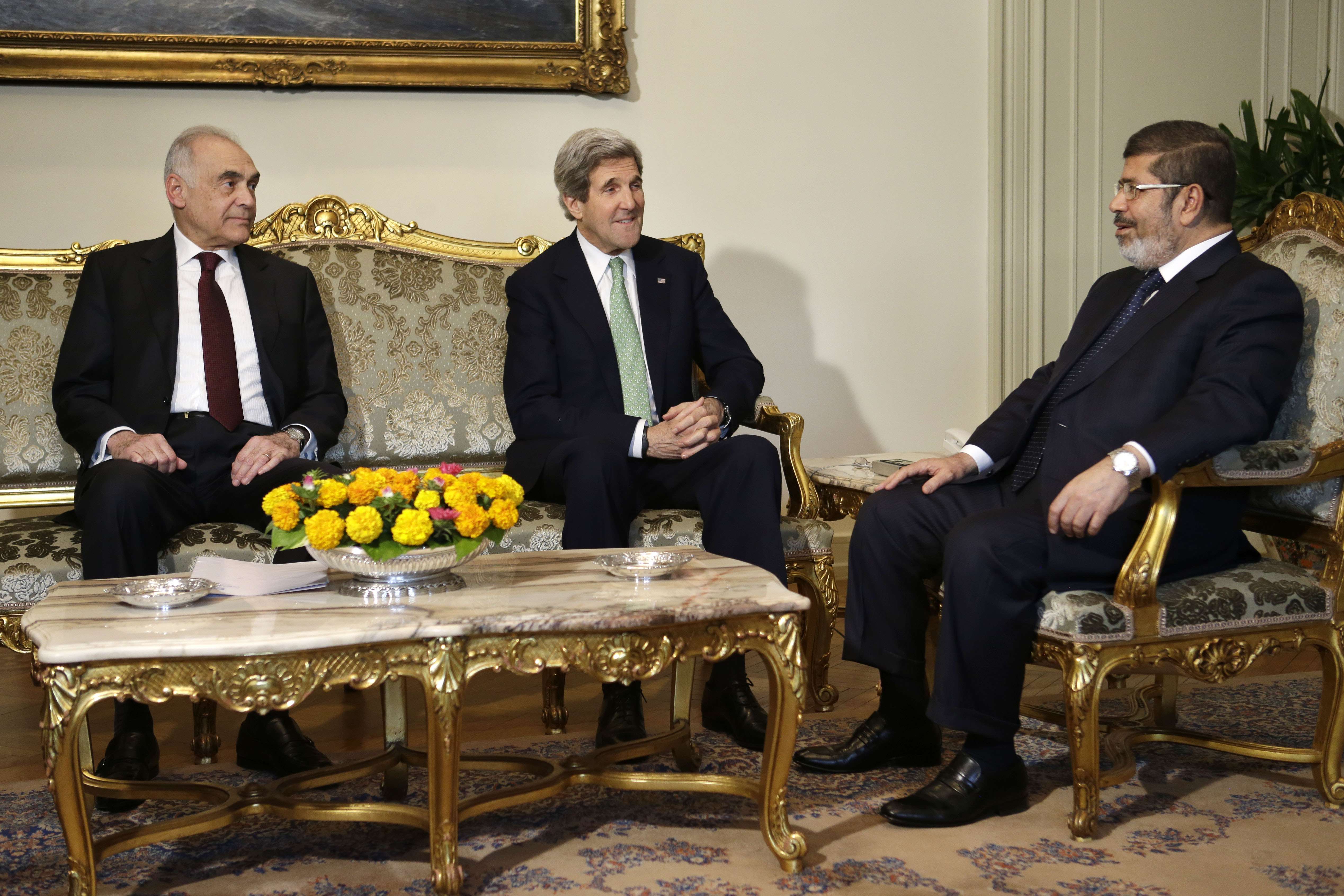 The reward came after Kerry’s two-day visit to Egypt, where he urged the Morsi to strike the proposed $4.8bn International Monetary Fund (IMF) deal after meeting Egypt’s Minister of Foreign Affairs Mohamed Kamel Amr on Saturday.

“When Egypt takes the difficult steps to strengthen its economy and build political unity and justice, we will work with our Congress at home on additional support,” Kerry said.

The IMF agreement would unlock significant US assistance to Egypt to receive the pledged $1bn that President Barack Obama promised last April.

Kerry later announced immediate US aid worth $190m of the larger pledged $450m “in a good-faith effort to spur reform and help the Egyptian people at this difficult time”.

“The United States can and wants to do more,” he added.

He later made a separate announcement for a new fund of $60m for “direct support of key engines of democratic change” directed at Egyptian entrepreneurs and young people.

With the parliamentary elections to be held in April, the US diplomat called on all liberal and secular opposition parties to unite to emerge from current economic crisis.

“Getting there requires a genuine give-and-take among Egypt’s political leaders and civil society groups just as we are continuing to struggle with that in our own country,” he said.

He also made note that the Obama administration will be closely watching Egypt’s economic performance in the meantime.

The US has expressed concern several times that the continued unrest in Egypt will have broader consequences in the long run.

After concluding meetings with political and business leaders on Sunday, Kerry said that “it is clear that more hard work and compromise will be required to restore unity, political stability and economic health to Egypt”.

Kerry’s visit sparked tensions in the country, as some Egyptians and opposition figures claimed that “Washington is siding with Egypt’s ruling Muslim Brotherhood”.

Protests took place in front of the Foreign Ministry denouncing Kerry’s visit and setting his pictures on fire.

Leading opposition figure and member of the National Salvation Front (NSF) George Ishaq said in a statement to Al Jazeera that the American foreign policy is “unworthy of trust”.

Ishaq continued to say that “what Washington really cares about is Israel’s security”.

Kerry however denied the allegations, stating that the US did not favour a specific candidate during Egypt’s presidential elections last year.

Morsi has been trying to seal the deal with the IMF over the proposed loan through tax increases on a number of goods and services, namely steel, cement, soft drinks, alcohol, cigarettes, and others.

Negotiations over the loan were postponed a number of times due to political unrest in Cairo, which made it difficult to secure the loan.

An invitation was, however, sent to the IMF delegation last Thursday to resume talks.

Minister of Investment Ossama Saleh has expressed hope that a deal could be done with the IMF by the end of April.

The IMF loan negotiations come amid political unrest and economic instability where the country’s foreign currency reserves fell to $13.6bn end of January.

Foreign currency reserves stood at $36bn before the 25 January Revolution.

Morsi was reported to have expressed the importance of Egypt’s relationship with United States, which is based on “mutual respect”.

After meeting with Morsi and Minister of Defence Abdul Fatah Al-Sisi on Sunday, Kerry flew to Saudi Arabia, and will later travel to the United Arab Emirates and Qatar as part of his overseas trip.