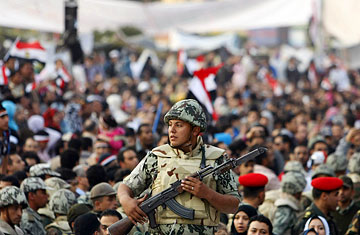 Around a dozen people went to the notary in Suez governorate on Monday morning to hand in signatures delegating the army to manage the state.

People in three different governorates have adopted the idea of giving signatures to notaries to demand that the army runs the nation.

Some of those who went to the notary in Suez called on former presidential candidate Khaled Ali to manage the state. The notary has accepted the signatures demanding the army’s intervention but refused the petition calling on Ali to run the nation, stating that delegations to legal entities can be accepted but not to individuals.

In the governorate of Sharqiya, calls for a similar signature collection campaign have been made by the I Am An Egyptian Girl movement. Wala’ Saeed, an activist in Sharqiya and founder of the movement, said that 50 people have agreed to hand in their signatures at the time of writing.

She added that a date will be set for these people to go to the notary to make their demand.

In the Upper Egypt governorate of Assiut a woman gave her signature at the notary on Monday, calling on the army to manage the nation, state-run Al-Ahram reported.

This campaign began in Port Said. Attempts to document the signatures at the notary last Wednesday failed after a judicial official ordered the notary shut down.

In response, a group of activists set up what they dubbed the Notary of the Revolution. Nasser Al-Boghdady, who heads the revolutionary notary, said that the movement has collected over 13,500 signatures.

Signatures are documented using national ID numbers and fingerprints, as well as a stamp that reads “The Notary of the Revolution. The Free Youth of Port Said”.

The revolutionary notary is located in Al-Masala Square where protesters have been camping during the recent unrest.