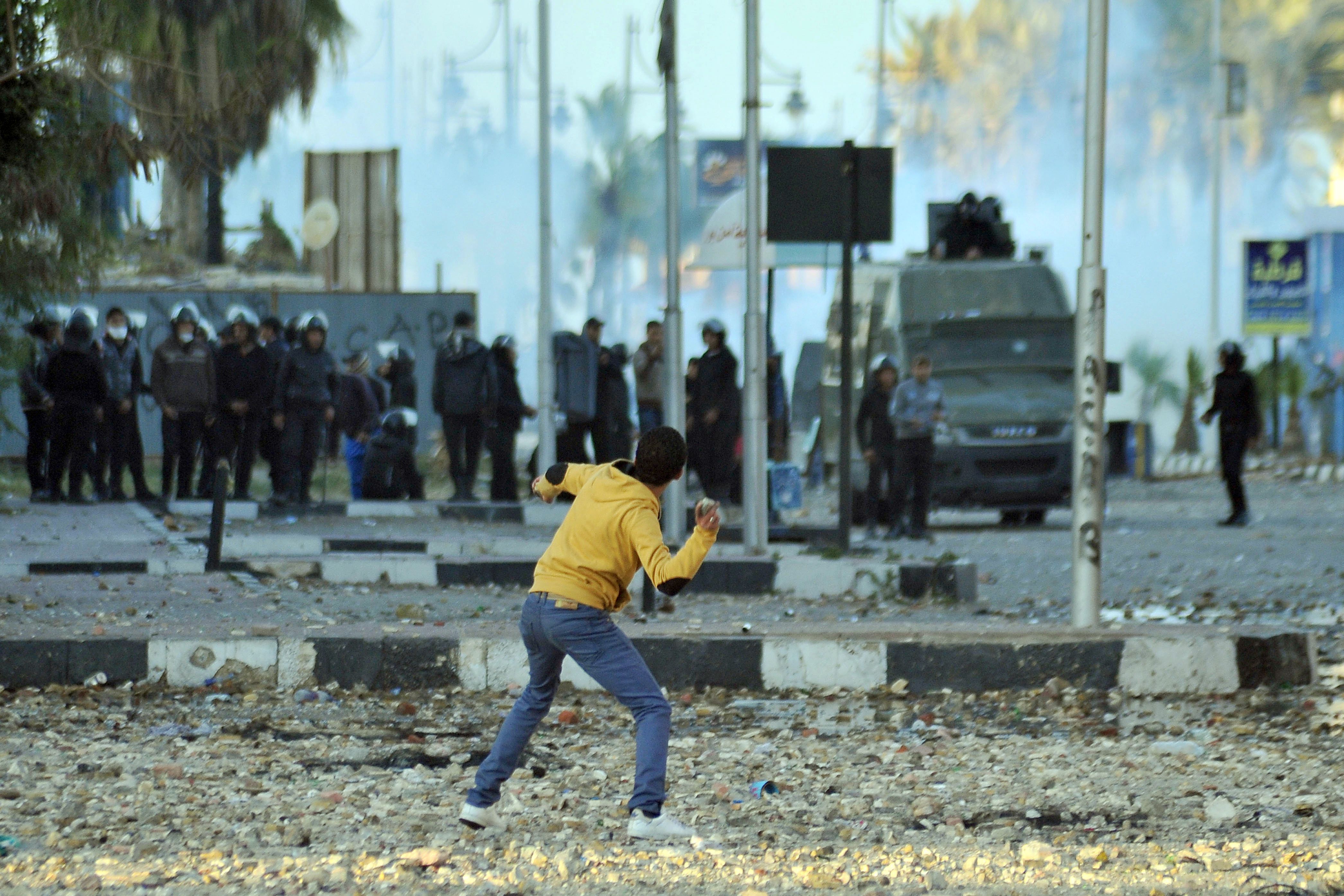 Clashes continue in Port Said, which bore the majority of the recent violence in the country, while other restive governorates are relatively calm on Tuesday afternoon.

The area around the Security Directorate of Port Said continues to witness clashes between police and protesters. Activists report that the Homeland Security (formerly State Security) building in Port Said was set on fire in the early hours of Tuesday.

The Security Directorate and the adjacent Governorate building were partially burnt after they caught fire on Monday. The fire came after popular funeral marches in the port city on Monday.

Al-Masala Square, which activists refer to as the Martyrs’ Square, where activists have been camping out, is near the governorate buildings.

Despite the clashes, the tent camp in Al-Masala Square is still in place. Port Said-based activist Mohamed Wefki said that “no one can disperse a camp-out in Port Said”. He said that some people leave at night, but return to the square in the morning.

Activists report that police have recently fired teargas at unprecedented levels. “Many people went to the Port Said General Hospital withrespiratory problems because of the teargas,” Wefki said.

Khaled Saeed, an activist in the port city, said that teargas is being used as an offensive weapon. “It hits people in the face… For example, Mohamed Nabil was hit with a teargas canister in the face from a distance of two to three meters and he lost his nose,” Saeed said.

“The entire police force is located in the area of the directorate,” Saeed added. He said that there are hardly any police personnel in the rest of the city.

Police and army personnel clashed in the port city on Sunday and Monday night. Wefki says the army is currently remaining neutral.

At least six people have died in Port Said due to the clashes and hundreds have been injured, most suffering from complications caused by teargas. Activists reported two more people were killed on Monday.

In Mansoura city in Daqahleya, which has suffered several days of violence, residents say conditions are calm. They explained that the clashes usually begin after 7 pm. Wael Ghaly, a lawyer at the Egyptian Centre for Economic and Social Rights who has followed up with detainees, said that at least 100 people have been arrested during clashes in the past week.

Ghaly said most of the arrests are random and that 90 per cent of those arrested were not involved in the clashes or protests.

On Monday night, an activist decided to celebrate his wedding near the site of clashes, bringing relative calm to the city.

The Al-Tagammu Party released a statement on Tuesday saying that three of its members were injured in the Mansoura clashes, adding that “the reckless operations by security forces involving live bullets, birdshot and suffocating teargas against peaceful protesters have left nothing but discontent and rejection of the government”.

The prosecution decided to hold the policeman accused of running over a protester in Mansoura for four days pending investigations.

At least one person died in Mansoura after being run over by a Central Security Forces vehicle. Clashes renewed after his funeral on Saturday. A massive march condemning the violence moved through the city on Sunday night.

The Popular Current is organising human chains in solidarity with the people of Mansoura and Port Said on Tuesday evening. The protests are in rejection of police violence and in support of the civil disobedience.

A symbolic funeral for Mohamed Al-Shafaai was held in Tahrir Square. His body has been transported to Damietta, his hometown, where he was buried.

On Monday night, unknown people on motorcycles threw Molotov cocktails at the Damietta governorate building before fleeing the scene, state-run Al-Ahram reported. They failed to torch the building.