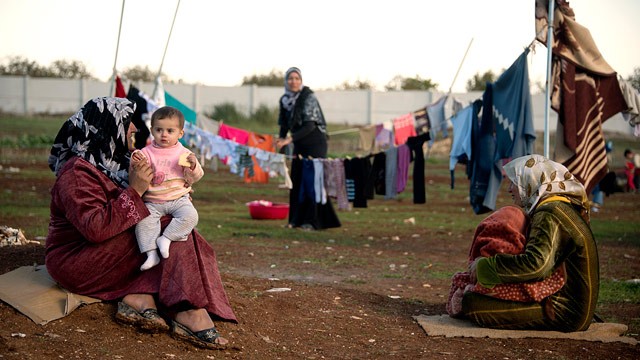 Ashraf Hamdi, Egyptian ambassador to Lebanon, met with the Lebanese minister of foreign affairs Adnan Mansour on Monday to discuss several issues, including the Syrian crisis and the enormous Syrian refugee population in Lebanon. Hamdi delivered a message from the Egyptian foreign minister Mohamed Kamel Amr, pledging to support Lebanon’s stability by supporting efforts to care for Syrian refugees currently in Lebanon

The embassy in Lebanon confirmed Hamdi met Mansour, adding that the two had spoken about incoming aid to Syrian refugees in Lebanon from Egypt. The aid is said to be worth $1m, and will not be handled by the government but by Egyptian non-governmental organisations (NGOs).

These NGOs will provide refugees in Lebanon with financial support and humanitarian aid in a bid to improve the living conditions of those displaced by the civil war in Syria.

It is unclear which NGOs are providing the aid, as the foreign minister and his spokespeople could not be reached for comment.

Sofia Taquid, the community outreach team leader working at AMERA, a refugee assistance centre in Egypt, was unaware of the project, adding she found it strange that Egyptian NGOs would consider sending aid to Lebanon given the current financial situation in Egypt. “I would prefer the aid was provided here instead of Lebanon because there are so many refugees in Egypt that need help,” she said.

According to the UN the number of Syrians displaced by the civil war totalled 975,000 people as of 3 March. In Egypt alone UN figures estimate 20,000 Syrians are being sheltered by the state and civil societies. Lebanon hosts more than 200,000, and is second only to Turkey which currently has 264,000 registered refugees.

Over 70,000 people have died as a result of the Syrian civil war, fought for the past two years.