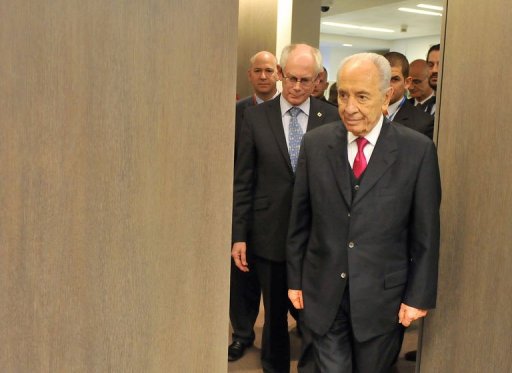 AFP — Israeli President Shimon Peres held out hopes Wednesday of seeing the Middle East draw inspiration from the European Union by one day turning a region long at war into one at peace.

Praising Europe for overcoming 1,000 years of conflict in six short decades as he visited EU headquarters, Peres said: “You have the gift of a united hope even if you have a divided economic situation.”

“I hope the time will come when the Middle East will become a peaceful united region like you.”

Peres, who is on an eight-day tour to Brussels, Paris and Strasbourg, said he believed there was “a new chance” of resuming peace talks with the Palestinians now that the elections in both Israel and the United States had taken place.

“We will resume the negotiations. Neither us nor the Palestinians have any other choice,” he said.

Brushing aside harsh criticism by the EU of Israel’s settlement policy, however, Peres said the main obstacle to resuming peace talks was not the quarrel over settlements but was about “terror.”

“Take the terror out of Gaza”, he said, accusing Hamas of converting the territory into a base for shooting missiles into Israel.

He called for both Hamas and Lebanon’s Hezbollah to be condemned by the international community.

Israel wants the EU to put the military wing of Hezbollah on a terrorist black list but European nations are waiting to see written proof that the group was behind an attack in Bulgaria last year.