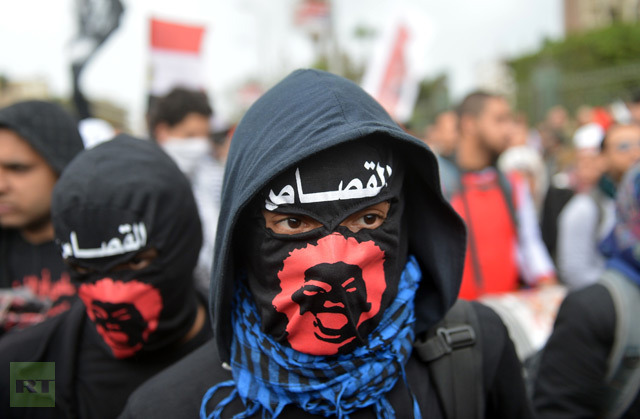 Prosecutor Hazem Salah ordered the arrest of five individuals suspected of being the founders and leaders of the Egyptian Black Bloc on Thursday morning.

The decision was based on reports received by the prosecution from public security and the intelligence and documentation sectors of the Ministry of Interior, Public Prosecution spokesperson Mostafa Deweidar said in a Thursday statement.

Deweidar added that the prosecution also received several reports and complaints from citizens, with CDs and newspapers attached as evidence, regarding journalists and talkshow hosts who “promote Black Bloc ideology” in their writings and television programs.

Several other Black Bloc members will be arrested soon, said Deweidar, who added that the information was gathered in a joint effort between several agencies, including the General Intelligence Service and the Homeland Security Agency.

A black bloc is a protest tactic adopted by anarchist groups and other protesters in Europe in the 1970s and to a lesser extent in the United States in the 1990s.

It is based on protection of other protesters through engaging the police or other riot squads and does not adhere to non-violent methods. Black Bloc groups have been known to damage property as a way to protest capitalism.

An Egyptian version of the Black Bloc emerged on the political scene earlier this year. Black Bloc members dress in black clothes and don black balaclavas in order to hide their identities.

The Muslim Brotherhood has accused them of attempting to overthrow the regime and of being Coptic Orthodox Christian Church militias.