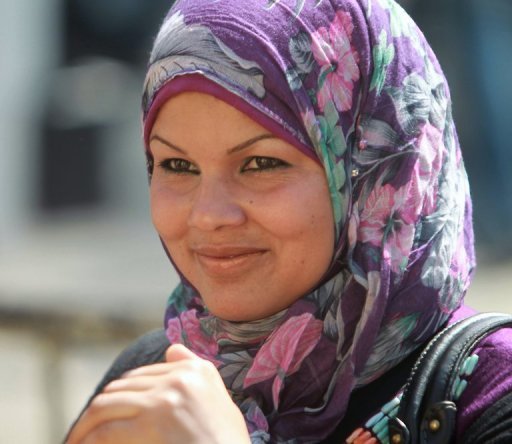 AFP –  In an embarrassing about-turn, the US Thursday said it would delay giving a prestigious award to an Egyptian activist to check reports she had made anti-American and anti-Semitic remarks.

Samira Ibrahim was to have been honoured Friday along with nine other women with the International Women of Courage Award at a glittering event to be hosted by top US diplomat John Kerry and First Lady Michelle Obama.

The annual award marking International Women’s Day is given to women for “exceptional courage and leadership in advocating for women’s rights and empowerment, often at great personal risk,” according to the State Department.

Ibrahim had been initially chosen “because of the incredible bravery and courage she displayed at the time of the Tahrir Square protests,” State Department spokeswoman Victoria Nuland said.

She acknowledged the department “became aware very late in the process about Samira Ibrahim’s alleged comments.”

“After careful consideration we’ve decide that we should defer presenting this award to Ms Ibrahim this year so that we have a chance to look further into these statements,” she told journalists.

The rightwing Weekly Standard said Ibrahim, who is prolific on Twitter, had written in August: “An explosion on a bus carrying Israelis in Burgas airport in Bulgaria on the Black Sea. Today is a very sweet day with a lot of very sweet news.”

She also allegedly wrote on September 11 “Today is the anniversary of 9/11. May every year come with America burning,” the Standard said.

Ibrahim has told the State Department that her account was hacked.

Of the 18,000 tweets Ibrahim has sent out in recent years, “she is denying authoring some four that were brought to our attention, two of which were anti-Semitic, two of which celebrated terrorism.”

She had already been in Washington for the ceremony and was now heading home as the department decided “these comments need to be looked into,” Nuland said.

According to the Weekly Standard, Ibrahim was among several Egyptian women who was forced by the military to undergo “virginity tests” during the protests in March 2011 in Cairo.

Nuland said she had been subjected to “real police violence” which she had spoken out against and “she became a real leader in her country in trying to address gender-based violence and other human rights abuses.”

Among the nine women who will be honored Friday are the Indian student who died after being gang-raped in a bus in Delhi in December; Tsering Woeser, a Tibetan poet and blogger; Malalai Bahaduri, a first sergeant and senior instructor with the Afghan National Interdiction Unit, and a Syrian human rights lawyer, Razan Zeitunah.