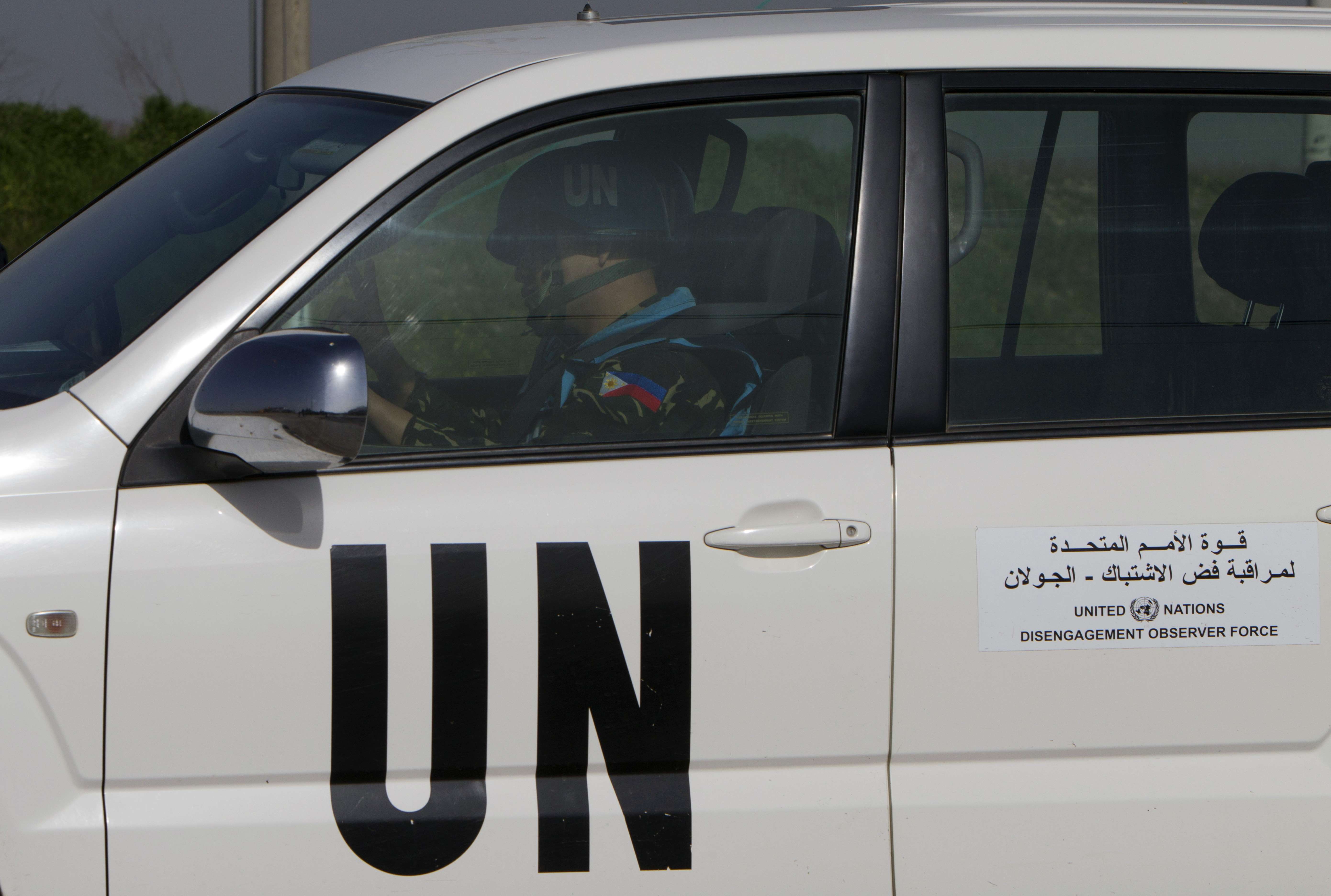 (AFP)– Filipino UN peacekeepers seized by Syrian rebels on the Golan were being taken on Saturday to the border with Jordan where they will be freed, the Syrian Observatory for Human Rights watchdog said.

“The peacekeepers have been transferred from the (Golan) village of Jamla, where they were held, towards the Yarmuk valley on the frontier with Jordan ahead of their release,” said Observatory director Rami Abdel Rahman.

He was unable to say when the 21 soldiers from the UN Disengagement Observer Force (UNDOF) would be freed, or whether they would be handed over to the Jordanian authorities, the UN or the Red Cross.

On Friday, citing the Yarmuk Martyrs Brigade which captured them, he said a deal had been reached between the Syrian regime and the UN for a truce between 0800 and 1000 GMT on Saturday to allow the Red Cross to evacuate the men.

It was the first abduction of its kind since the conflict erupted in Syria nearly two years ago.

In Manila, a military spokesman said shelling late on Friday, which had prevented the captives being handed over, had stopped.

“After the shelling the two parties (UN and the rebels) resumed coordinating the arrangements for their release,” Colonel Randolph Cabangbang told AFP.

“The planned venue of the handover was not actually shelled. It was the route that they planned to take.”

On Wednesday, the Yarmuk Martyrs Brigade said it captured the Filipinos and would hold them until President Bashar al-Assad’s troops withdrew from the Jamla area, east of the ceasefire line with Israel.

In New York, UN peacekeeping spokeswoman Josephine Guerrero said on Friday that efforts to secure their release would resume on Saturday.

Another Philippine spokesman said on Saturday the government had confirmation from the ground that the hostages were safe.

“They are being kept (by the rebels) in a safe area,” Colonel Arnulfo Burgos said.

UN peacekeeping chief Herve Ladsous said the Jamla village where the soldiers were being held had come under “intense shelling” on Friday.

That was denied by Syrian UN Ambassador Bashar Jaafari, who said Syrian forces were doing “everything in order to bring back safely the peacekeepers.”

US State Department spokeswoman Victoria Nuland accused Damascus of “making it impossible for UN negotiators to get in there and try to resolve it.”

The Filipinos, members of UNDOF monitoring the armistice line between Syria and Israel that followed the 1973 Arab-Israeli war, were abducted just a mile to the Syrian side of the line.

The rebels are demanding that Syrian troops move 20 kilometres (12 miles) back from Jamla.

The Observatory said the rebels were also demanding that the International Committee of the Red Cross “guarantees the safe exit from the strife-torn area of Jamla of civilians,” Abdel Rahman said.

Concern has been mounting that the abduction might prompt more governments to withdraw their contingents from the already depleted UN mission.

Israeli officials warned that any further reduction in UNDOF strength risked creating a security vacuum in the no-man’s land between the two sides on the strategic Golan Heights, which it seized in the 1967 Six-Day War.

World powers remain at loggerheads over the way forward for Syria, with Western governments firm in their demand for Assad to quit, and China and Russia equally firm in their opposition to any imposed regime change.

“You know that we are not in the regime-change game,” Russian Foreign Minister Sergei Lavrov reiterated on Friday. “We are against interference in domestic conflicts,” he told the BBC.

French President Francois Hollande said “the Russians still need to reach out and convince Bashar al-Assad to stand aside.”

Clashes raged on Saturday between troops and rebels in Daraa in the south, the Observatory said, adding that loud blasts were heard in Damascus province.

At least 146 people were killed in violence in Syria on Friday, according to the Observatory, in a conflict the UN says has killed more than 70,000 people in nearly two years.