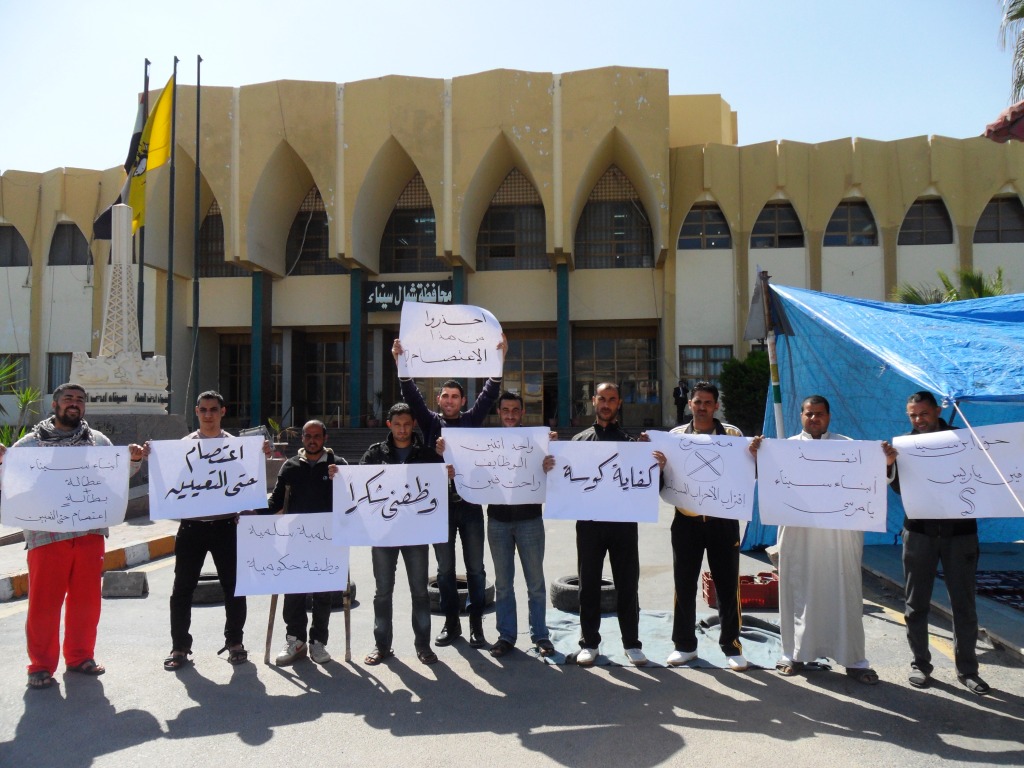 Dozens of protesters gathered on Sunday morning in Bir al-Abd in Northern Sinai, locking the doors to the City Council Building and preventing workers from entering while setting tires alight. They demanded that the government provide jobs for the unemployed and chanted against the Muslim Brotherhood, saying “Overthrow the rule of the Guide!” and “No to the Brotherhood ruling the country!”

Protesters said they sought to hold officials accountable on promises previously made guaranteeing the distribution of job opportunities to city residents. In particular, they mentioned Madhat Salih, Secretary General and aide to the North Sinai Governor, who last week held a meeting with protesters claiming that a new program would be put in place to address their grievances. So far nothing has been done, according to protesters.

Meanwhile, families of political prisoners implicated in the 2004 Taba and Sharm El-Sheik bombings protested outside the North Sinai Public Office. They engaged in a sit in, refusing to leave until their relatives were released from prison.

The wife of one prisoner said that government officials had repeatedly promised that her husband would be granted a retrial. These officials included President Mohamed Morsi, who pledged to intervene on behalf of her husband during a meeting last week with a delegation from the Sons of Sinai Organisation. During the meeting pledges were apparently made to release those in need of medical attention.

In the city of Al-Arish, the Union of Unemployed Workers of Northern Sinai organised a protest on Sunday morning in front of the Public Governor’s Office, and demanded that job opportunities in Service Directorate positions or in the City Council be awarded to city residents. Protesters also demanded better standards of living.

Members of the Protesters Union, some of whom are young college graduates, protested and held up signs saying “Peaceful, peaceful” and “We want government jobs,” while chanting “Hire me, thank you”.