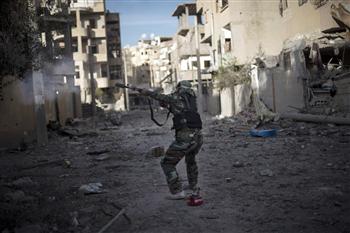 (AFP) – Syria rebels staged a surprise dawn attack on Sunday against the key district of Baba Amr in the central city of Homs, a year after regime forces retook it after a deadly month-long siege.

Activists said the assault aimed to ease pressure on other districts in Homs where the army launched an offensive several days ago to capture rebel enclaves.

The new battle for Baba Amr began as jihadist fighters in the oil-producing east said they had established religious committees to administer the area’s policing, judiciary and emergency services.

The violence also came as UN High Commissioner for Refugees Antonio Guterres warned that the number of Syrian refugees, which has already passed the million mark, could double or triple by the end of the year.

“We announce the ‘great victory battle’ to liberate neighbourhoods (controlled by the army), namely Baba Amr, and ease the pressure on our comrades and on besieged Homs districts,” a rebel said in a video posted on the Internet.

Omar, an activist who is in touch with the insurgents, said the rebels had infiltrated Baba Amr under cover of darkness. “Those manning the army checkpoints barely had time to realise what was going on,” he said.

The army, which controls around 80% of Homs, Syria’s third-largest city, launched an offensive several days ago to recapture Khaldiyeh in the north and rebel enclaves in the old city, using helicopters to bombard them.

The army has besieged Khaldiyeh and neighbourhoods in the old city for eight months.

Assad later toured the battered neighbourhood, assuring residents that it would be rebuilt and normal life would resume.

Hundreds of people, many of them civilians, were killed in the campaign which left much of Baba Amr in ruins.

Among them were two foreign journalists, American reporter Marie Colvin of The Sunday Times in Britain and French photojournalist Remi Ochlik, who died when a makeshift media centre was shelled by Syrian forces.

In the east, where large swathes of territory are now under rebel control, insurgents including the jihadist Al-Nusra Front have set up a religious council to administer affairs, the Observatory said.

“God commanded the Islamic battalions to form a religious council in the east to administer the affairs of the people and fill a security gap,” the groups said in a statement distributed by the Britain-based watchdog.

Video footage showed a convoy draped with black flags bearing Islamic inscriptions in the Deir Ezzor area and rebels attaching a banner to a building in Mayadeen, on which is written “Religious Committee of the Eastern Region.”

The Al-Nusra Front, completely unknown before the rebellion, has been a rebel standard-bearer since mid-2012 when it became the spearhead of the insurgency ahead of the Free Syrian Army.

FSA fighters have told AFP that despite being fewer in number, the Al-Nusra jihadists have better logistic and economic backing and receive financing “from abroad.”

The jihadists, who have claimed responsibility for suicide attacks, have made no secret of their aim to see Syria become an Islamist state.

Damascus accuses both Saudi Arabia and Qatar of financing Islamist groups and labels all armed opposition “terrorists” financed from abroad in the insurgency which the UN says has killed more than 70,000 people since March 2011.

At least 160 people were killed across Syria on Saturday, and if no solution is found the number of refugees could greatly multiply, Guterres told reporters in Ankara.

“Now if this escalation goes on and nothing happens to solve the problem we might have in the end of the year a much larger number of refugees: twice or three times the present level” of one million, he said.

Meanwhile, Manila hailed Saturday’s release of 21 Filipino UN peacekeepers freed by Syrian rebels into Jordan after they were abducted on the Golan on Wednesday.