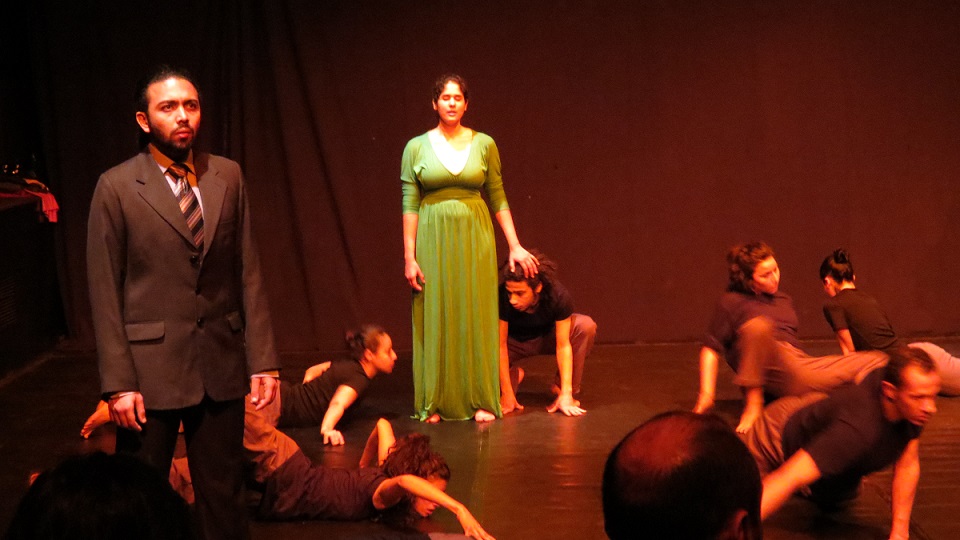 On 8 March the Cairo Contemporary Dance Centre showcased the talent of their first-year students. The centre was founded in January 2012 by Karima Mansour and the students receive three years of dance education.

The evening included five short performances, each choreographed by a different choreographer. The first performance was called Ritual Regression, choreographed by Florence Moutin. It showed the gradual regression from a regular person to a primitive being, and also the resistance that people show at the beginning. Well, at least that is what we understood from the piece.

Only four dancers were standing and the rest were squirming on the ground, while occasionally attacking the standing dancers. The primitive squirming beings also emitted strange sounds that resembled cats fighting. Our bewilderment aside, the dancers showed great control over their bodies and impressive flexibility. They also seemed focused, undeterred by the fact that the audience were just a couple of metres away.

The second performance was called Stance, choreographed by Dalia El Abd , which was based on synchronisation. The piece showed the dancers’ ability to move as a unit as well as dancing solo. The third performance was called Another Scene, choreographed by Tamer Fathi, and the dancers showcased their Modern Jazz training. They seemed to have fun with it and the crowd was greatly entertained during the piece.

The fourth performance was called Parade, choreographed by Laurence Rudic, where dancers showcased their somatic training. This seemed more like acting than dancing. After the performance, Mansour said that: “a performer needs to carry the choreographer’s work responsibly,” and that the somatic training allows the dancers to do so.

Basically, the training is based on carrying a specific emotion to the audience and the dancers seemed to do just that. The final performance was untitled and choreographed by Mansour herself, and she said: “You are free to give it your own title.” The piece seemed more of a summary of what contemporary dance means than an effort to project a certain story line.

The dancers showed great potential, and although understanding modern dance seems tricky, it was nice to see a very different kind of performance. Although some of the performances seemed a bit repetitive at times, overall the evening was entertaining. There was a great deal of commitment and passion involved and that is always good to watch.

If there is one thing to criticise about the evening it was the lack of organisation in getting the tickets and getting into the theatre. It was not the dance company’s fault, but rather the bleak governmental organisation of the Opera House. Overall, the experience was promising and we look forward to seeing where the dancers will be in two years’ time.