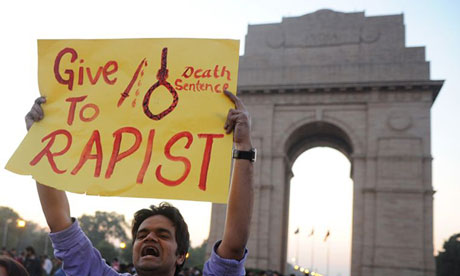 (AFP) – Ram Singh, the 34-year-old Delhi gang-rape suspect who died on Monday, was a heavy-drinking migrant who was ready to accept his punishment for taking part in the crime, family and neighbours say.

Singh was accused by police of being the ringleader in the fatal gang-rape of a 23-year-old student on a moving bus in New Delhi last December in a case that prompted outrage and soul-searching over India’s treatment of women.

He, along with his younger brother Mukesh, another of the six suspects on trial for murder, rape and kidnap, moved to the capital in the early 1990s to escape grinding poverty in their native village in the western state of Rajasthan.

The family found a place in the Ravi Dass Camp slum, a maze of narrow lanes, open drains and mud-and-brick houses with corrugated metal rooftops, while the brothers went on to look for jobs as bus drivers or labourers.

“He made a mistake, he admitted that to us, but even God forgives one mistake,” Singh’s distraught mother Kalyani Devi told AFP after hearing of his death in top-security Tihar Jail on Monday morning.

“He was not even given a chance to repent,” she sobbed, despite the fact that Singh, along with his co-accused, had denied all charges.

On the night of the December 16 attack the suspects allegedly gathered at the family home for dinner and drinks before taking the bus for a joyride, luring on board passengers who mistook the vehicle for genuine public transport.

After her male friend was beaten up the victim was repeatedly raped before being sexually assaulted with an iron bar, leading to severe internal injuries that would claim her life 13 days later.

Some neighbours recalled Singh, who was slightly built with narrow, slanting eyes, as a troublemaker whose drinking grew worse after his wife’s death in 2008.

“They used to drink and get into fights with people,” said Kajal, a 21-year-old college student who lived next door to the Singh brothers.

“When I got to know about his death this morning, I felt nothing. He would have died anyway. It is just that he decided to end his life a little earlier.”

Singh’s father Mange Lal told AFP that his son had been resigned to facing the death penalty when sentences are handed down by the court, which has been hearing the case since January.

“My son told me that he was ashamed by what had happened on 16 December. He said that he would accept whatever punishment was given to him by the court,” he said.

Singh leaves behind a young boy aged four or five whom he legally adopted, neighbours said. The child is thought to be the son of Singh’s late wife from a previous relationship.

Singh was the first of the accused to be arrested when police pulled over the private bus allegedly used in the attack, which was normally used to ferry schoolchildren.

Detectives’ suspicions were aroused because the seats of the bus had been freshly cleaned.

“He pretended as if it was just another normal day and he was back to work,” Chhaya Sharma, a deputy commissioner of police who was in charge of the gang-rape investigation, told AFP in a recent interview.

On Monday journalists crowded outside Singh’s shack while a small group of policemen stood nearby and watched.

People in the area said they resented the spotlight the case had shone on their locality.

“We live in constant fear of the unknown. We don’t like the sudden attention. We are used to our normal, everyday life,” Seema Singh, a 24-year-old neighbour, told AFP.

During a life of anonymous labour and poverty common to many migrants to the capital, Singh had once previously entered the public limelight when he appeared on a reality TV show hosted by former top police officer Kiran Bedi in 2010.

On the programme the widower was publicly accused by a former employer of drink driving and irresponsible behaviour.