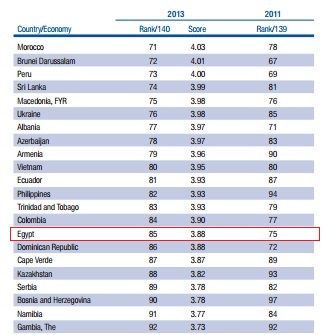 Egypt came in last on The World Economic Forum’s (WEF) Travel and Tourism Competitiveness Index (TTCI) in terms of security and safety, coming below Pakistan, Yemen and Chad.

Egypt also plunged 10 places in terms of the TTCI’s overall ranking to place at 85 out of 140 countries on the 2013 index, coming behind Colombia, Trinidad and Tobago, and the Philippines, respectively.

He also attributed Egypt’s new overall ranking to the absence of security, irregular Metro services, transport cuts, and a lack of hygiene in the services that are provided.

According to the report, Egypt came in bottom in terms of security and safety as a result of the continued political turmoil that has plagued the nation since the 25 January Revolution, and which led to a decrease in security levels compared to other nations on the index.

The report, published every two years since 2007, ranks nations using a performance rating based on a number of indexes including security and safety, health and hygiene, transport infrastructure, natural resources, cultural resources, affinity for tourism and travel among others.

Egypt ranked 57th this year in terms of health and hygiene, while it also came in at 57th in terms of air travel and transportation infrastructure.

Abdel-Aal commented that tourism in Egypt needs “the political leaders to praise and welcome it,” and he called on the presidency to promote the tourism sector.

“We have two kinds of tourists,” he added. “Positive and negative. Now Egypt is experiencing the negative kind.”

“That kind of tourist is not fruitful to the tourism sector anymore,” he explained.

“Almost all contracts with foreign tourism companies have been cancelled,” he said.

Abdel-Aal expected a further decrease in occupancy rates by the summer session, unless some “positive changes” occur.

Amr Sedky, deputy chairman of the TTAC’s board of directors, said: “Tourism has further declined since calls from activists to revive the revolution and oust the Morsi regime.”

The tourism sector in Egypt has suffered due to the political instability in the country over the last two years, with violence in Port Said and unrest across Egypt, as well as the recent hot air balloon disaster, putting tourists off holidaying in the country, tourism officials said.

Many tour organisers refused to take bookings after calls for protests in January 2013, particularly after clashes outside the Semiramis Hotel in Cairo.