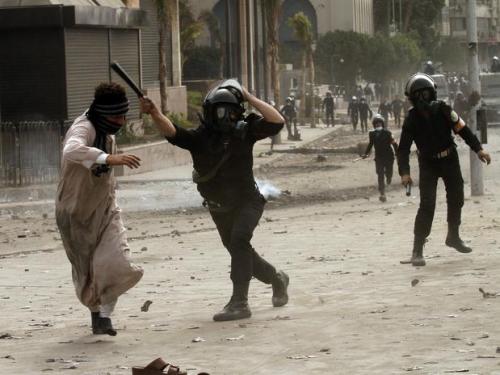 Clashes between protesters and security forces around Mahalla Second Police Station continued on Sunday, although the station’s police officers are on strike.

Protesters gathered in Al-Shoon Square on Sunday before moving towards the nearby Mahalla Second Police Station, which they attacked with rocks and Molotov cocktails, according to activist and Mahalla resident Mahmoud Haroun. Protesters called for the dismissal of the minister of interior and the departure of President Mohamed Morsi. “We don’t need the ministry of interior, we have popular committees” was among the most repeated slogans during the protest.

Striking security forces fired teargas at protesters and called for Central Security Forces (CSF) to support them. CSF vehicles arrived later at the police station and succeeded in dispersing protesters. No arrests or injuries were reported on Sunday, said Ahmed Abdel Kader, a member of the Al-Dostour Party in Mahalla.

Police officers began their strike on Saturday by freeing all protesters detained on Friday and closing down Mahalla Second Police Station, according to Haroun. Abdel Kader said police officers hung a sign promoting their strike and stating that they do not want to intervene in the current political crisis.

Meanwhile in the Sha’abiya district of Mahalla, residents formed popular committees to protect their homes after they were repeatedly attacked and robbed during the past few days. “They contacted the police several times, but the police refused to come, saying they are on strike,” said Haroun and Abdel Kader. Haroun added that residents are currently collecting money to employ a security company to provide them with security personnel.

Clashes also took place on Saturday, as protesters hurled rocks and Molotov cocktails at Mahalla second police station after their gathering at Al-Shoon square was attacked by armed men. “Protesters suspected that those thugs were pushed by security forces to end their protest at the square, and accordingly they headed towards the police station,” said Haroun.