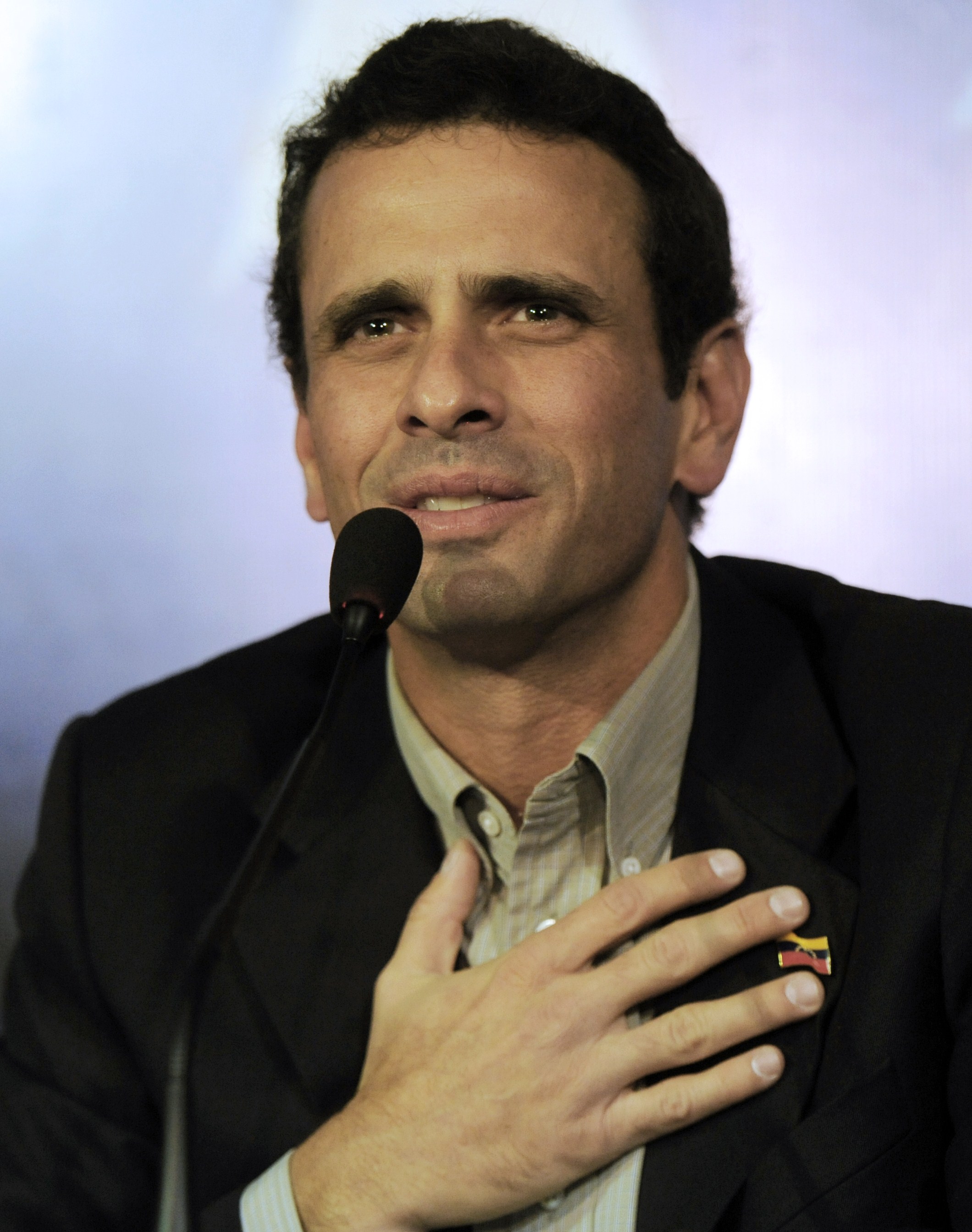 (AFP) – Venezuela has entered a bitter election race to succeed Hugo Chavez, with his chosen successor branding his challenger a “fascist” after the opposition candidate accused him of exploiting the late leader’s death.

Henrique Capriles accepted Sunday the nomination of the main opposition coalition for the April 14 election, immediately launching a broadside against acting President Nicolas Maduro by accusing him of being “sick with power.”

“Nicolas, I won’t leave you an open path, mate. You are going to have to defeat me with votes,” said Capriles, who lost to Chavez in the October presidential election by 11 points and faces an uphill battle against Maduro.

Chavez, whose socialist revolution divided his oil-rich nation, is casting a huge shadow in the election, with throngs of supporters flocking to see his body lying in state since Wednesday at a Caracas military academy.

Maduro says the government will embalm Chavez’s body to be viewed “like Lenin” in a glass casket “for eternity.”

“Now on top of it all, you are using the body of the president to stage a political campaign,” said Capriles, the energetic 40-year-old Miranda state governor.

After weeks of rumors about the president’s health, Maduro went on national television last Tuesday to announce the death of Chavez, telling that nation that the firebrand leftist had lost his two-year battle with cancer at the age of 58.

“Nicolas lied to this country,” Capriles said, adding that the former vice president had been buying time during Chavez’s illness to prepare the election.

He added: “Who knows when president Chavez died?”

Chavez traveled to Cuba on December 10 for a fourth round of cancer surgery and was never heard from or seen in public again, apart from one set of photos. He returned to Caracas on February 18 but was never seen until his death.

Maduro went on state-run television minutes after his rival’s press conference, standing in front of a picture of Chavez in military uniform as he accused his rival of trying to foment violence with “disgusting” accusations.

“His mask has fallen and we can see his nauseating fascist face,” he said, warning that the Chavez family was reserving the right to take “all legal action to defend the honor of president Hugo Chavez.”

“His objective is to provoke the people of Venezuela. He is irresponsible,” the broad-shouldered former vice president said.

“He is looking for the people of Venezuela to … go on the path of violence,” he said, urging Venezuelans to “not fall into provocations.”

Amid popular pressure to place Chavez alongside South American independence hero Simon Bolivar in the national pantheon, Maduro said he would propose a constitutional amendment to move him there to the legislature on Tuesday.

He called Chavez “the great redeemer of the poor.”

The move would lead to a referendum in 30 days that could coincide with the presidential election. The body will first be moved on Friday to a military museum where Chavez plotted a failed coup in 1992.

Luis Vicente Leon, director of pollsters Datanalisis, said the grief over Chavez’s death gives the government an advantage in the race.

“It will be a battle between the divine and the human,” he said.

The two candidates will register for the snap election on Monday.

Capriles accused the government again of abusing its power and violating the constitution by swearing-in Maduro as acting president late Friday, arguing that he should have stepped down in order to run for office.

Maduro has countered that the opposition conveniently misinterpreted the constitution and that his inauguration followed the wishes of his predecessor, who had asked the nation to elect him if he died.

Chavez defeated Capriles by 11 points in the October presidential election, but Capriles gave the opposition its best result ever against the president, garnering 44 percent of the votes.

A recent survey by pollsters Hinterlaces gave Maduro a 14-point advantage over Capriles, though the opposition leader has questioned the firm’s reliability in the past.

Capriles, a youthful, energetic lawyer and runner, drew massive crowds during the last campaign, bringing hundreds of thousands of people to the streets of Caracas for a rally in the final stretch of the race.

But Chavez was propelled to victory again thanks to his popularity among the nation’s once-neglected poor, who worshipped him for the oil-funded social program that brought them health care, housing and education. His expropriations and nationalizations of key industries, however, have riled the wealthy.

The opposition accused Chavez of abusing state funds and dominating state-run media in his campaigns.