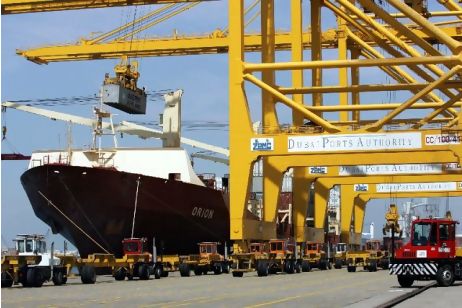 The company stated that this new line would introduce container shipping to the port of Mogadishu, allowing clients to obtain their products more quickly and more securely.

Container shipping into Somalia ended several years ago due to the threat of piracy and the country’s deteriorating security situation. Without container shipping, Somali businessmen operating in Mogadishu have had to resort to using smaller ships to import their goods.

The UAE’s Ministry of Foreign Affairs has previously mentioned the need to develop links between Somalia and the rest of the world to revive the country’s economy and help combat piracy, most recently during a series of Anti-Pirating Conferences hosted in 2011 and 2012.

Muhammad al-Moallem, Senior Vice President and General Ports Manager for DP World, recently stated that “we welcome the introduction of SIMATIC services to be used in helping to connect Somalia to the international market by way of the UAE’s Jabal Ali port. This is an important step in working to speed up Somalia’s economic development and provide long term solutions to help combat piracy, by giving Somalis a source upon which they can build stable and secure livelihoods”.

The move comes as part of an attempt to expand SIMATIC services offered throughout the Middle East and other regions. Sources stated that the use of shipping containers in the Port of Mogadishu would initially occur bi-weekly and would soon increase to weekly.

Dubai’s most recent Anti-Piracy Conference took place in June 2012 and was attended by representatives from both the public and private sectors. A number of businessmen and international dignitaries called for aid for Somalia in working to address the risks involved in shipping along its coasts, particularly piracy and the country’s deteriorating economic situation.

Huge achievements in combating piracy were reportedly made after the UAE’s first Anti-Piracy Conference, held in April 2011.