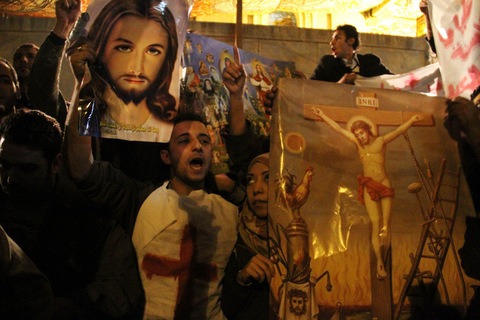 The Egyptian embassy in Libya contacted the Public Prosecutor in Libya to follow up on the Egyptian Copts being interrogated in Libya.

Egyptians held protests outside the Libyan embassy in Cairo on Monday night in protest to Atalla’s death and the continued detention of Egyptian Copts in Libya.

Atalla’s body will be flown to Cairo on Tuesday night. His wife has held several meetings with Libyan authorities and forensic experts to learn the details of her husband’s death.

Though Atalla had suffered from diabetes and heart problems and media reports claimed he died of natural causes, the cause of death remains unclear. One doctor at the Maspero Youth Coalition has said he was denied adequate medical care.

The Egyptian Organization for Human Rights said in a statement that it is very concerned with Atallah’s death, saying he was “subjected to torture.”

Head of the organisation Hafez Abu Se’da said Atallah’s death is a clear violation of international law for human rights. The organisation demanded opening that the Egyptian Foreign Ministry asks Libyan authorities to open up an immediate investigation.

A statement released by the Egyptian embassy in Libya said it has repeatedly visited the Egyptians who remain in custody and that they have not made any complaints of mistreatment.

The Egyptian Copts were initially interrogated upon arrival to the Libyan capital, Tripoli.

Reports of Egyptians facing deportation, torture and abuse in Libya have recently risen. Around 160 Egyptians were recently deported from Libya after being detained in several parts of the country, state-run news agency MENA reported. They were deported for various reasons including illegal immigration and lack of identification documents. This comes after over 250 were deported earlier in March, as part of a crackdown on illegal migrants.

Dozens of Egyptian Copts were detained and allegedly tortured after Bibles and pictures of Jesus were found with them.  In December 2012, an Egyptian Coptic church was attacked in Misrata killing two Egyptians and injuring two more.