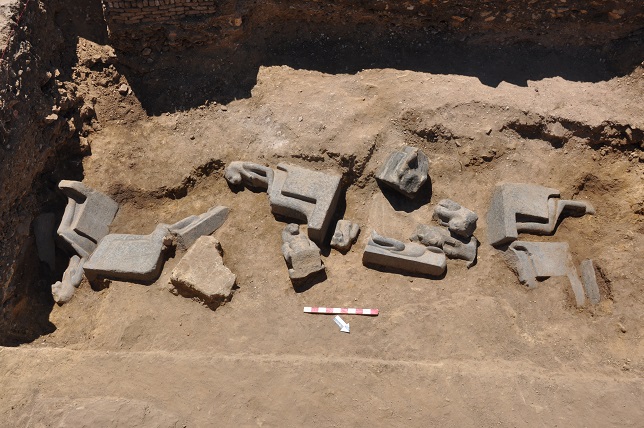 Minister of Antiquities Dr Mohamed Ibrahim has announced the discovery of 14 black granite statues which represent the goddess Sekhmet. The statues were discovered by the German mission at the archaeological site in Amenhotep III (1410 BCE -1372 BCE) temple.

The discovery of that many statues of the goddess funerary temple denotes the important role of the goddess during Amenhotep III’s reign. The statues were likely put there in an effort to gain divine protection, as Sekhmet was the goddess of war and destruction.

In addition, some archaeologists think that Amenhotep III had Sekhmet’s statues placed in the temple because he was ill. It is believed the pharaoh thought Sekhmet could cure sickness. The statues have been moved immediately to secure them and in preparation for their restoration.

The supervisor of the monuments region in Luxor, Mansour Brick, said the statues are all of Sekhmet, sitting on the throne, with a human body and the head of a lioness. Each statue is two metres tall and they are all in good condition for preservation.

The discovery also denotes that the funerary temple of Amenhotep III was filled with a great number of gods’ statues as were also found in the king’s temple in the eastern mainland of Luxor, which is known as the temple of the goddess Mut. This phenomenon is evidence of Amenhotep III’s prosperous and stable reign as pharaoh.

The German mission has discovered a similar group of statues in the past, bringing the total excavated to 64 statues.