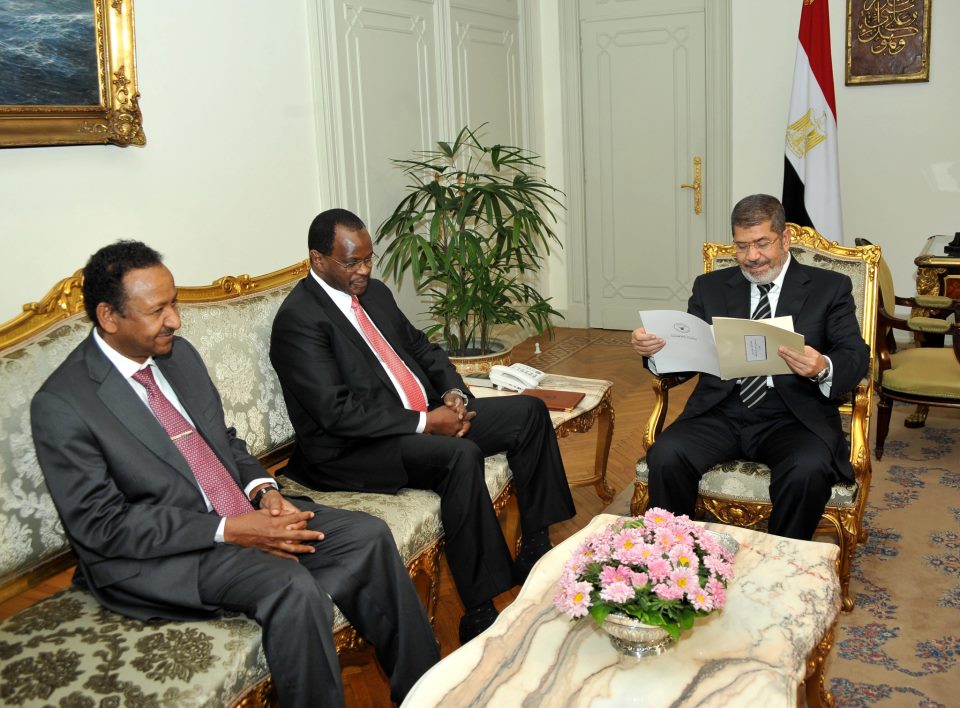 Executive Chairman of the Darfur Regional Authority Tijani Sese and Sudanese minister of investment Moustafa Ismail met with President Mohamed Morsi on Monday to discuss bilateral relations and the reconstruction of the Darfur region.

According to a statement released by the Presidency, the Sudanese representatives delivered a letter to Morsi from Sudanese President Omar Al-Bashir. It contained ideas for developing bilateral relations, “especially in the fields of economy, investment, trade and agriculture”.

Morsi expressed “his interest in opening new horizons for bilateral cooperation to serve the interests of the two countries”. He also informed the Sudanese representatives of his desire to visit Sudan “at the earliest opportunity”.

Ismail thanked Morsi for the interest he has taken in relations with Sudan, according to the statement. The expansion of bilateral relations between Egypt and Sudan is expected to include the creation of a free trade zone between the two countries and the opening of a cross-border road to the west of the Nile.

At the Ministry of Foreign Affairs, Kamel Amr pledged Egypt’s support for the upcoming conference and the peace process in Darfur, “through participating in the peacekeeping mission there and its membership of the committee monitoring the implementation of the peace agreement in Darfur”.

Kamel Amr also highlighted the need for investment in the region, “referring to Egypt’s keenness to continue cooperation programs in Darfur, including the training courses for the development of leaders of Darfur, medical convoys and other cooperation programs”.

The Darfur region of Sudan experienced a bloody civil war starting in 2003. In 2011the Darfur Peace Agreement was signed in Doha and established the Darfur Regional Authority to oversee the region until a referendum can be held to decide if the region will become autonomous.

In February the United States Department of State said that after ten years of conflict in Darfur the US was concerned over continuing violence in the region. It added that the on-going conflict between government forces and rebels has “led to the deaths of nearly 300,000 people, the vast majority unarmed civilians”.

Egypt currently provides both military and police personnel as part of the joint United Nations and African Union peacekeeping force in Darfur.