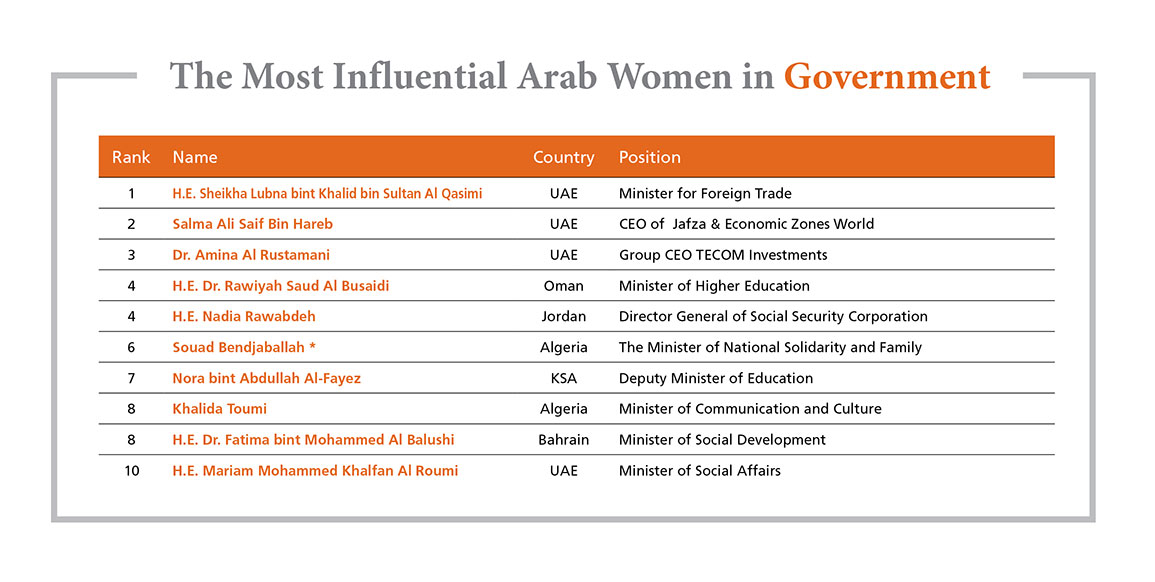 Coming in third place of the ranking is Bahraini Mona Almoayyed, the managing director of Y.K. Almoayyed & Sons Group.

Saudi Arabia dominates the ranking of with 12 companies from a total of 33. UAE follows with five companies to its name, though not leading the group in terms of entries.

From family prowess to national prosperity, the Arab world’s women are also proving themselves more than capable of guiding their countries to economic and social progress. In the ranking of “The Most Influential Arab Women in Government”, the UAE again boasts a total of 11 women in government positions or at the helm of high profile government-backed companies.

The Emirates’ dominance in this ranking is illustrated not only in the quantity of its list, but also their high ranks. H.E. Sheikha Lubna Al Qasimi, minister of foreign trade, Salma Hareb, CEO of JAFZA and Economic Zones World, and Dr Amina Al Rustamani, group CEO of TECOM Investments occupied the top three spots.

With three entries each, Oman and Kuwait also demonstrated the important role that women are playing in shaping their nations’ futures and as well as that of the region.

“In the governmental sector we don’t have shining women figures, as we usually see only one woman in the minister chair, however their positions seem unimportant” said Saly Zohny, a woman activist.

She added society does not let women take a strong position in governments because of stereotyping that women are incapable of such responsibilities.

“I’m really astonished that there’s not ranking for Egyptian women in the business sector, especially that we have pioneering and successful women in this field in many sectors; especially in tourism,” Zohny said.

She added that the poor economic situation and lack of resources in Egypt might be the reasons for not ranking any Egyptian woman. In UAE and Saudi Arabia for example they have a strong economic situation that helps them to produce more, so their success is measurable.

“The governmental sector is highly bias against women, especially those in ministry positions or other specific sectors,” said Labiba El-Nagar, member of the National Front of Egyptian Women.

She continued: “The Egyptian mentality is biased against women in complex and deep seated ways, and our current government fiercely wants to silence the voice of women.”

El Nagar added that Egyptian women do not normally hold positions in the industrial sector in Egypt, in addition to the sector in Egypt not being strong enough to be considered competitive.