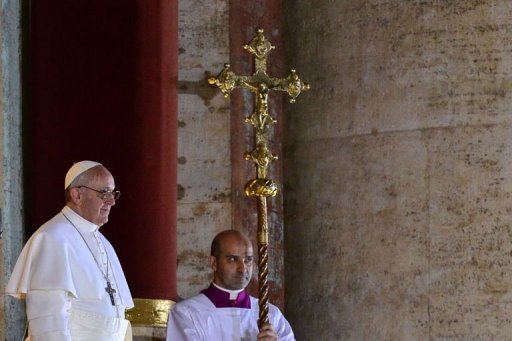 The self-effacing archbishop of his native Buenos Aires — also the first Jesuit pope — was nowhere near the top of the list of frontrunners to replace the retired Benedict XVI, and his election was a powerful signal to the region with the world’s largest Catholic population that has demanded its rightful place in the Church.

His election after five rounds of voting suggested a run-off with one of the other leading contenders, notably Italy’s Angelo Scola and Canada’s Marc Ouellet, to take over a Church hit hard by sex abuse scandals, internal bickering and growing secularism in Europe.

Argentina’s highest-ranking prelate, 76, enjoys great prestige at home, where he is known for his humility, reflected in his choice of papal name of Francis I, the first pope to choose the name of St Francis of Assisi, the 13th-century founder of the Franciscan Order and a symbol of asceticism.

He is also well-known to the Vatican, and was believed to have been the runner-up in the 2005 election of Benedict.

Vatican expert Bruno Bartoloni said this presented an “easy solution” for cardinals facing an abrupt choice from a broad field.

Bergoglio is “a solid, pragmatic, efficient man who can do something concrete, notably to reform the Roman Curia” — the internal workings of the Vatican, Bartoloni told AFP.

“On the social level he is probably very open, while probably conservative on moral issues,” he said, describing a duality that is typical of the cardinals named by Benedict and his predecessor John Paul II.

Bergoglio’s personal warmth is also seen as an asset after the eight-year papacy of the introverted Benedict, who made a stark contrast with John Paul II’s near-rockstar status built over a quarter-century as pope.

There has indeed been a hunger for a leader who can re-ignite Catholic faith, particularly among young people.

In this regard, Bergoglio’s age may be a handicap.

But this election came in the context of Benedict’s abrupt resignation last month, the first time a pope has abdicated voluntarily in 700 years, aged 85.

While some analysts said Benedict’s precedent would call for a younger candidate, others said an older one would now be freer to resign.

Latin America faces growing competition with evangelical groups, seen as an alternative to a Church dogged by scandals of sex abuse by priests and internal divisions, and analysts said it was no coincidence that in Bergoglio’s first address as pope he spoke of “new evangelisation”.

“The Church must get rid of obstacles, tarnished things, bad management — which all undermine the goal” of finding God, said Vatican expert Sandro Magister of Italy’s L’Espresso weekly.

A “confused, disoriented (Curia) must become more agile” in order to serve the pope properly instead of “undermining his communication with the bishops,” he added.

Andrea Tornielli, a Vatican expert of the Italian daily La Stampa, said the “new evangelisation should not be open to other points of view on doctrine (and) take on the sufferings and anxieties of the modern individual.”

Some analysts did suggest that Benedict’s historic resignation could push the cardinals to take an equally unusual decision and that an outsider could emerge as a compromise candidate.

That had boosted hopes in the Philippines for the popular Archbishop of Manila, Luis Antonio Tagle, and on the African continent for South Africa’s Wilfrid Napier, the archbishop of Durban.

Two-thirds of the cardinals who elected Bergoglio are from Europe and North America, and the prediction among many analysts had been that they would have opted for a safe bet.

Scola’s election would have been a return to centuries of Italian popes after the 35 years under Benedict and John Paul II, something that may have been seen as a retrenchment.