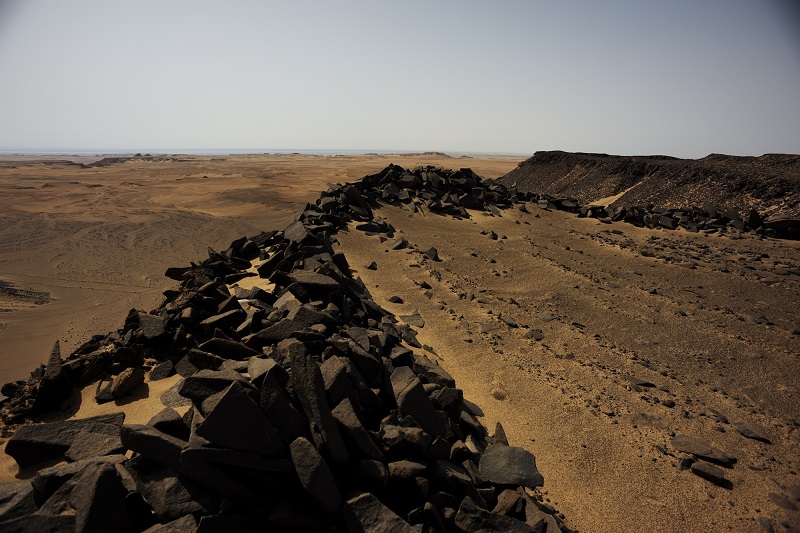 The region around Fayoum is rich in contrasts. Sun-baked desert valleys give way to frigid lakes and lush farmland fed by Nile water from the Ibrahimiya Canal that splits off from the river some 300 km upstream. If you can persevere through an early start on the Friday, the area lends itself very well to weekend trips from Cairo.

The single overnight stay is nowhere near enough time to appreciate a significant proportion of Fayoum’s sites and delights, but it is a good start and a welcome break from the routines of a weekend in Cairo. What follows is an idiosyncratic take on a short desert driving trip and is not intended as an exhaustive guide to the area around Fayoum.

Dark basalt rock, formed deep under the earth some 30 million years ago, rings the jagged hills around Widan El-Faras. The irresistible tectonic forces that pushed the basalt to the surface also gave the ancient rulers of Egypt an easier passage to the afterlife. The Old and Middle Kingdom pharaohs mined the basalt for their tombs, believing the black stone would better preserve their remains.

Remnants of a paved road from 3,000 BCE stretch off through the undulating sands towards Buhayret Qarun, Lake Qarun, where transport would convey the weighty cargo to the Nile and onto the temples under construction. The feet of these ancient workers crunched over traces of an even older history. The valley floor hosts the by now ossified remains of a forest ecosystem that predated the parched desert by millions of years and petrified bones of turtles and monkeys now lie thinly covered by the baked sands.

Perched inside the rock face where the hill top plateau falls precipitously away to the valley floor, the caves at Abu Lifa provide a natural escape in the wild landscape. One main cave gives way to several smaller compartments, one of which has a well dug down deep into the hillside.

The ceiling is partially plastered white and bears traces of writing that our guide tells us is early Coptic Christian script. Reaching the caves necessitates a scramble up the shingle covered hillside and a deceptively difficult climb up the last few metres of sheer rock face. It is well worth making the effort and not being afraid of getting dirty, as a further wriggle between split boulders gives you access to the escarpment above and commanding views over the surrounding countryside.

Driving through the desert, the shards of a surviving wall first appear on the horizon like a millennia old mirage. The Ptolemaic-era city of Dimeh Al-Siba refuses to relinquish its grip on the raised ground it stands on, despite centuries of dereliction. Built on what was originally a peninsula extending into Lake Qarun, the water level dropped over time and retreated away from the desert town.

A well-preserved 400 metre paved road stretches south towards the lake that both linked Dimeh to the outside world, and gave the town its protective enclosure of high brick walls. A mixture of sand and mud harvested from the lake bottom was made into the bricks both light enough to stack up to 10 metres high and strong enough to remain standing after two millennia.

Wait for your own group to disappear down the ancient lake road and look out from the splendid isolation of Dimeh, and contemplate the ancient traders who would scan the same desolation before setting off in camel trains for the oases of the Western desert.

The approach to the eco camping site provided one of the more memorable drives of the weekend. Turning off the road that skirts past Wadi Al-Rayyan, there is 50 km of paved road winding its way through sand dunes stretching out to the horizon. As we were running late, the deep colours of the setting sun vividly illuminated our speeding convoy as we swept across the sea of sand.

The camp itself is a gem of beautiful location and sympathetic design, with mudbrick buildings housing clean facilities. Each group occupies a separate camping niche in the steep valley sides, giving the feeling of glorious isolation as the night rolls in and the camp fire roars into life.

The long and chilly night provides sustenance for both the soul and the mind. You can wander off and to stare at the night sky bursting with far off stars, contemplating mankind’s insignificance in the grand scheme of things. After which you return to the warmth of the fire and the good company gathered around it, knowing that Epicurus was onto something when he recommended the good life surrounded by friends.

The next morning our guide took us on a spirited walk around the valley of whales. As with the celestial gazing at night, the philosophical implications of the 40 million year old bones are quite amazing. The fossils capture the animals in the later evolutionary stages of retuning to a marine existence. The now redundant hind limbs gradually disappear and their bodies take on a recognisably modern whale shape, while retaining aspects of their primitive skull and tooth structure.

It’s quite amazing to visualise the power of evolution in action. I found myself slightly conflicted by the neat layout of the whale bones which indicated either a very compliant death by the creatures, or a ‘not quite as nature intended it’ reconstruction by the excavation teams. The guide insisted the creatures lay where they were found, but conceded a certain amount of tidying up had been necessary to fully engage the non-specialist visitors.

It is not a complaint, I would certainly learn more from complete skeletons rather than scattered bones, but you get a feeling I can only describe as ossified kitsch, with the neat skeletons delineated by pebble borders of the kind my grandmother uses to mark out the rose bed in her English garden.

My sense of wonder was also tempered by the depredations of the late morning sun, exacerbated by the late night and early start, and the sheer number of fossil bones. They helpfully number the proto-whales along the route so I could quantify my failing strength. By whale five I had fallen in with the straggling four year olds far behind the group, and by number eight we voted with our feet and went back to the camp.

Reached via a slightly treacherous descent down steep banks of soft sand, the manmade reservoirs of Wadi Al-Rayyan offer the tempting prospect of a cooling dip on the edge of the desert. Delayed by the necessity of lathering my pale limbs in sunscreen, I was alerted by the squeals of the first swimmers to the unexpected cold of the water. By a quirk of local topography, the Northern lake is higher than the Southern one, and when the area was flooded by the channelling of runoff water from Fayoum they created Egypt’s one and only water fall.

Nestled at the South West end of Buhayret Qarun, the large natural lake, Tunis is a relaxed Egyptian village with a slight Marie Antoinette twist. Famed for its pottery, the village has seen an influx of foreign and Cairene artists and tourists eager to reconnect with authentic Egyptian craft without sacrificing too much in the way of creature comforts.

Unpaved roads populated by horse and donkey carts and bare footed children share space with shiny BMWs making their way to the village’s one bijou hotel and restaurant. The gardens of this establishment look over palm orchards onto Buhayret Qarun, with the added benefit of a modest infinity pool to enhance the experience. It is a genuinely friendly place and it lives up to the artistic hype; the pottery is indeed fabulous.

Government will not sell lands of Petrified Forest: cabinet